March 11th and February already seems a long time ago. And yet, it’s really not. Clearly a month of paradoxes, partly February felt really quiet – but we also managed to get on with some quite sizeable jobs. I also finally upgraded from my much loved dino-phone to a phone which interacts with the modern world with fewer grinding sounds and objections. Somehow, however, I haven’t yet streamlined the extracting-photos-from-the-phone process and I’m also convinced my phone has been occasionally losing photos I’ve taken. Which all means there aren’t quite as many shots this month but hopefully there’s still a tale to pick out. 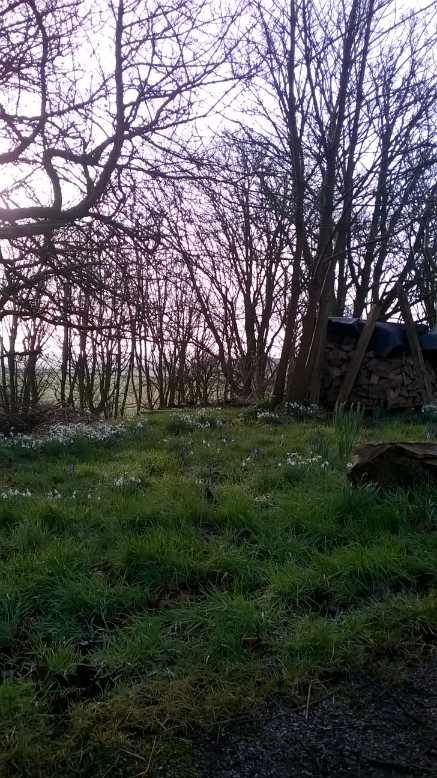 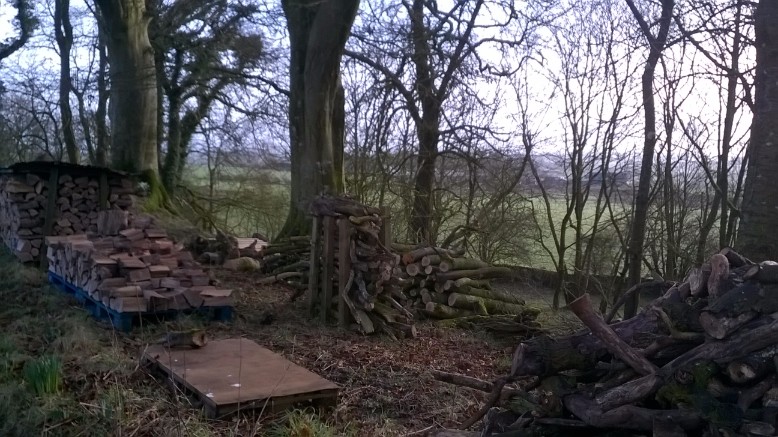 Tim, our New Zealand WWOOFer (in exchange for working on our projects, we give volunteers bed and board for the duration of their stay), was good at just getting on with things. He both planted the stakes for the rack in the middle of this picture, and filled it up with bits of elm branch which are awaiting chain sawing… 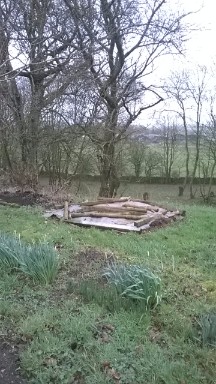 Not the best shot of it, but you may notice the soil on the left hand side of this photo, next to the covered bit in the middle. That soil is in our tree nursery – which has just had about 30 elder trees extracted for imminent planting elsewhere 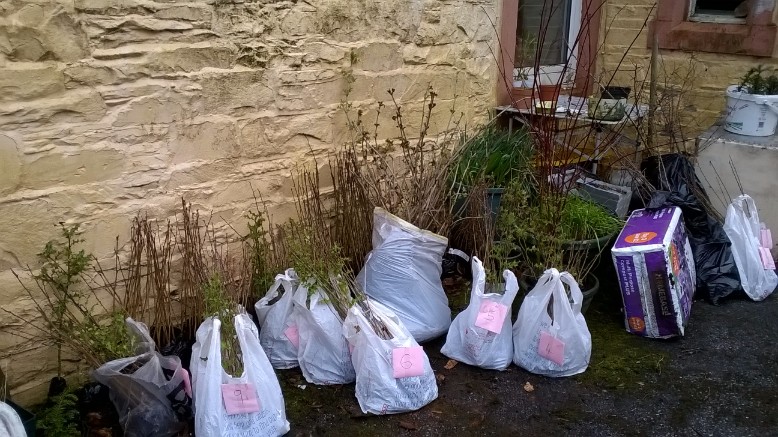 We’ve got together with a number of our neighbours (where “Neighbours” means “friends living within a 2-ish-mile-radius”) to have periodic get togethers to do land-based / project based work together. We had a total of 6 adults (plus one small human) arrive towards the end of the month to help us plant a bunch of trees. We were planting up a number of different 4mx4m squares and anyone who knows me will not be surprised these bags, each numbered by square and with the right number of rosa rugosa, hawthorn, and hazel (with the odd holly here and there) for that particular spot. Ah, preparation – lovely! 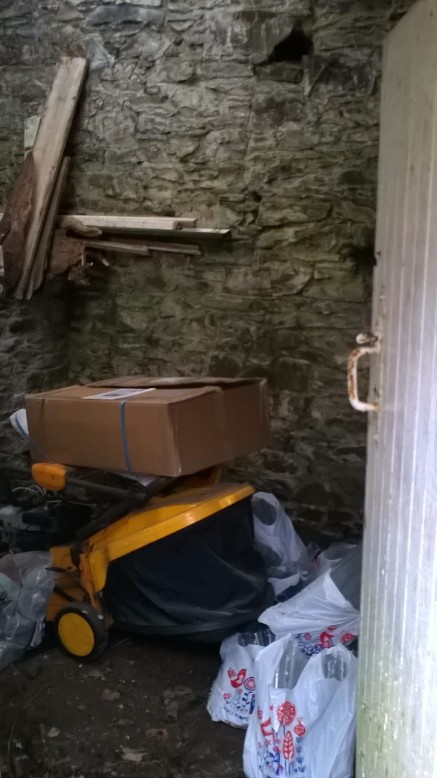 Very much an “after” photo, but I’ve been clearing out the larger of the two stone sheds and the lawn mower is sitting in a corner which previously was a heap of miscellaneous soil / plaster / stuff. The box on top contains all our vole guards for our new trees (they’re pretty big so we’re often cutting them in half) and the carrier bags on the right are, you got it, bags of the right number of voleguards for each tree-planting-square… 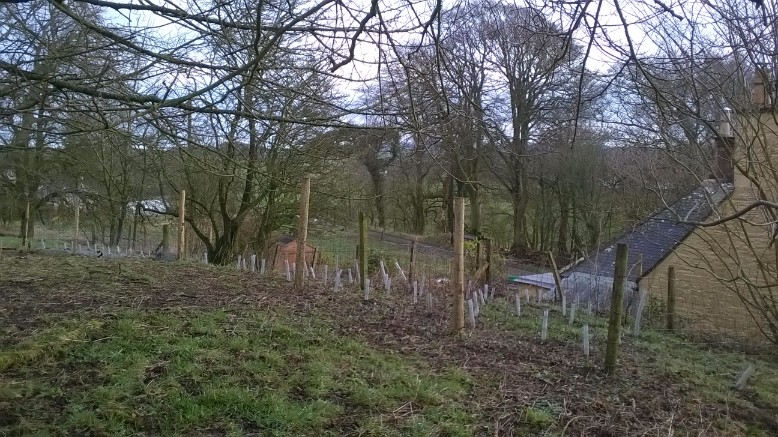 Chris and I conversed and planned, Tim the WWOOFer put in most of the required fence posts, and with our merry band of neighbours we planted up the squares. These squares in particular also benefitted from a number of larger tree saplings which had been given to us by another neighbour (see earlier definition). This particular location is one of the highest points of our land – the idea of most of these trees is to provide shelter. Our boundary is about 10 metres behind where this photo was taken and, we’re hopeful, this patch will be a flood of bluebells in the coming months (we thought we didn’t have any – but a year of no grazing and we seem to have patches popping up all over the show) 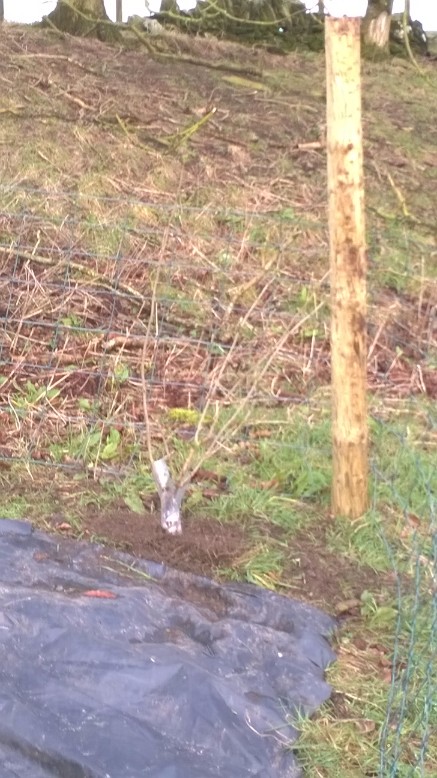 Most squares had rosa rugosa on the windward side, a mix of hazel & hawthorn for most of the square and a couple of elders on the leeward side, both so they’d get a bit of protection and so that, all being well, we’ll get to see the blossoms from them in years to come. These elders took a bit more planting as they had a year’s worth of roots from our tree nursery but I was still astounded how much they had grown in that year. They came originally from my folks’ place in Oxfordshire, most of them being less than 2ft (and many even smaller) when I brought them north in Feb 2016 but they’re very happy and doing well in the Borgue climes so far! 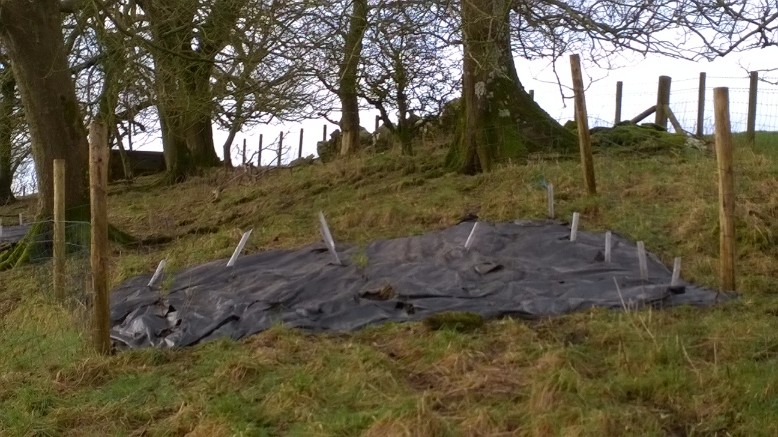 We managed to get some old silage plastic from Chris’ old home (who had been using it for their veg gardens and who had, in turn, got it second hand from a farmer) which we’re using as a sheet mulch while the trees get established 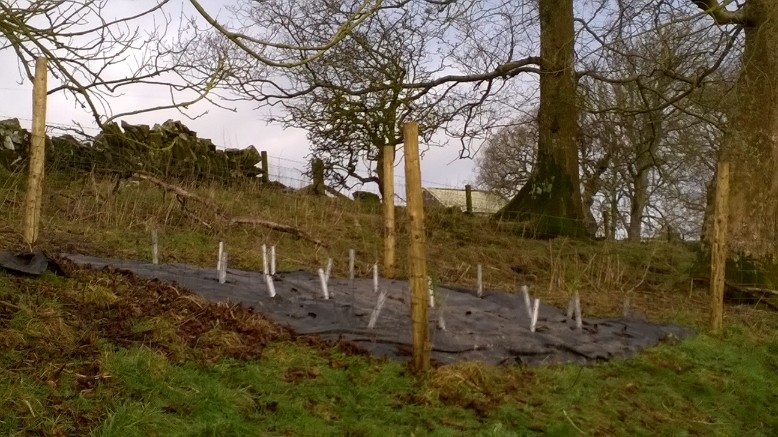 A square fully planted, at the top of the bank between the house and the church 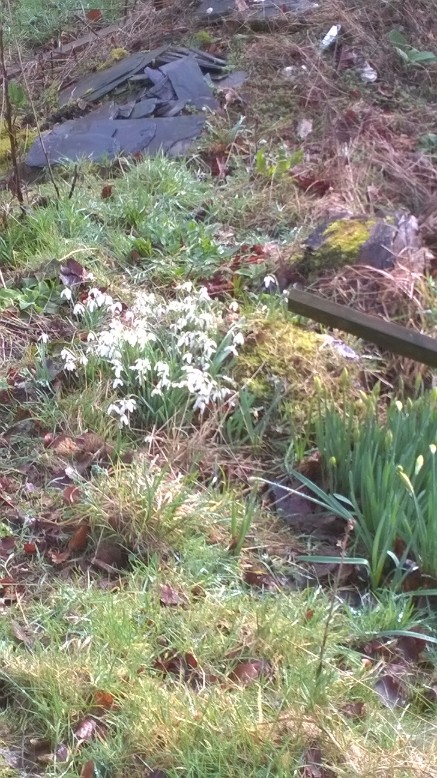 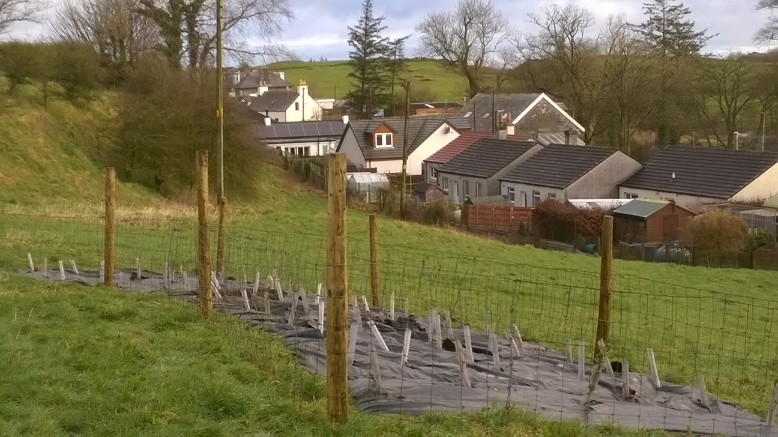 Chris and I had many conversations agonising over how many trees to buy. Who to buy them from. What species to buy. We ended up with a (what we thought) fairly modest 400ish but after various iterations of the tree-square planting plan, we found we had rather more trees (in fact half of the original 400) left. This patch was originally planned as two squares at either end with a view to filling the middle section in future years – but we ended up planting the whole thing. Although one of the more exposed sections, this shelters an area we’re not necessarily going to be planting up heavily as it’s further from the house. It will benefit our newest fruit trees (and some more established trees – maybe 5-10 years old – in our actually-sharing-a-boundary neighbours’ garden) and is part of the longer-term shelter plan 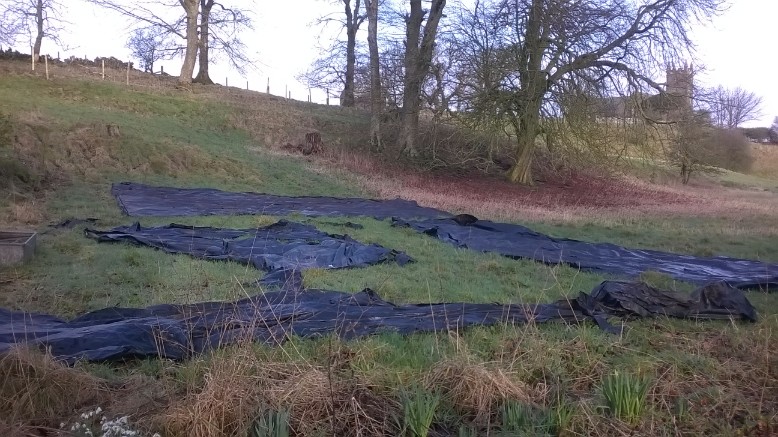 Having brought home a bunch of silage plastic I decided the most sensible option (to me) was to lay it out to see what we had. I was concerned we wouldn’t have enough for the tree squares but we ended up with plenty (and some to keep for our potatoes! Hurrah!) 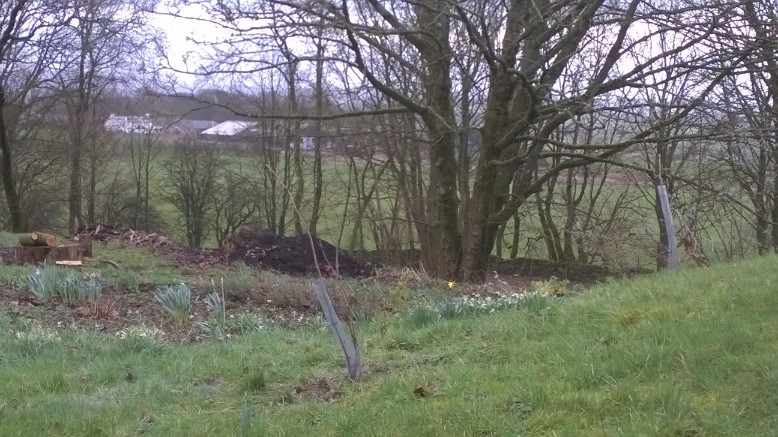 Affectionately known as the grass knoll, we have a slightly raised bit of ground near the house, immediately beyond the end of the drive towards the south. Between the house and the trees the grass knoll is a lovely place to sit in the sun – and a bit of a wind tunnel. The tree guards are around a couple of elders we’ve put in to start a wind break – we’ve since added some hollys too. 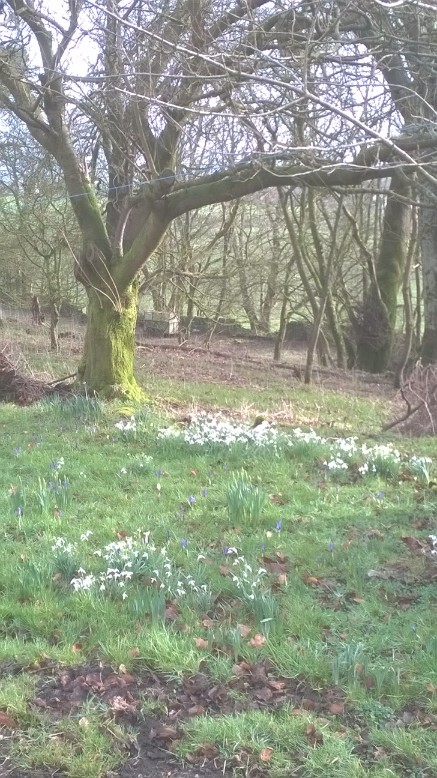 Snowdrops under the big cherry tree at the front of the house. This patch of grass is also littered with crocuses now (photos coming in the March installment) – which makes getting to the washing line without squashing flowers an interesting challenge 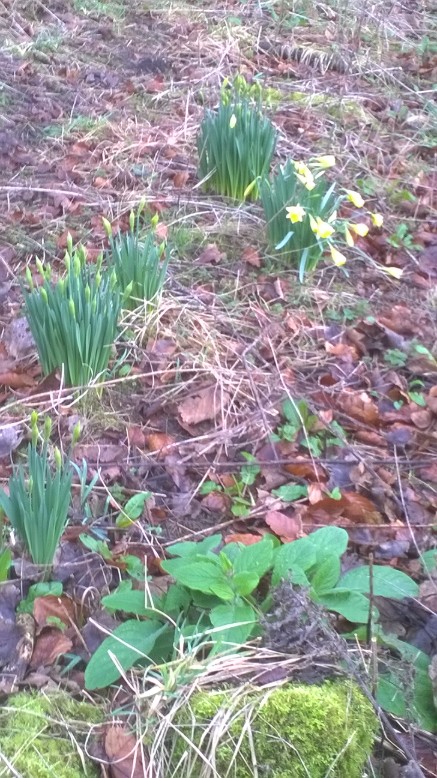 Woodland daffs with primulas emerging. These were among the first daffodil flowers to emerge 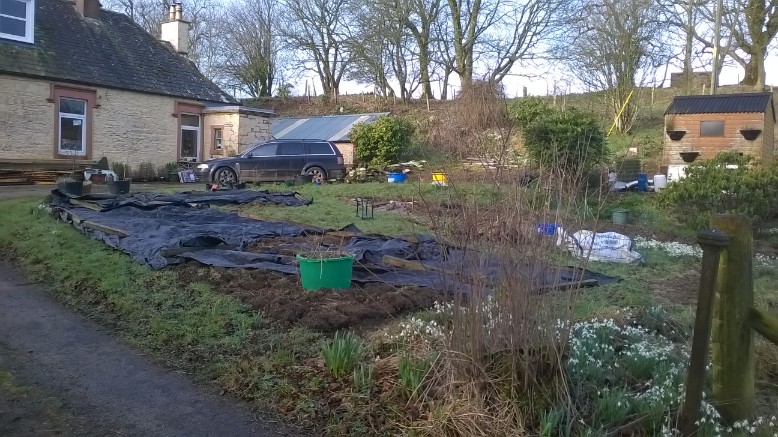 The former “north lawn” looking significantly more like a prospective veg patch. The soil’s pretty thin so we’re looking at options to increase the depth of it but having turned all the turf for the beds myself, I feel pretty pleased. The black plastic isn’t exactly a full sheet mulch at the moment but if anything can keep those weeds down and kill off the grass which we no longer want there, I’m happy with any contribution it makes 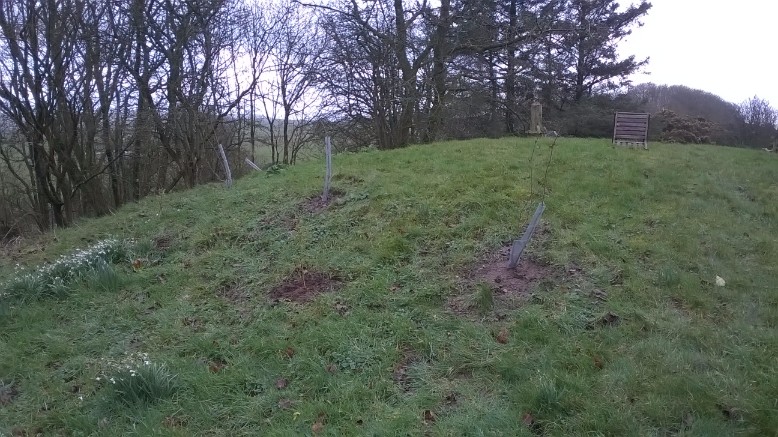 The grass knoll elders from the drive, looking south 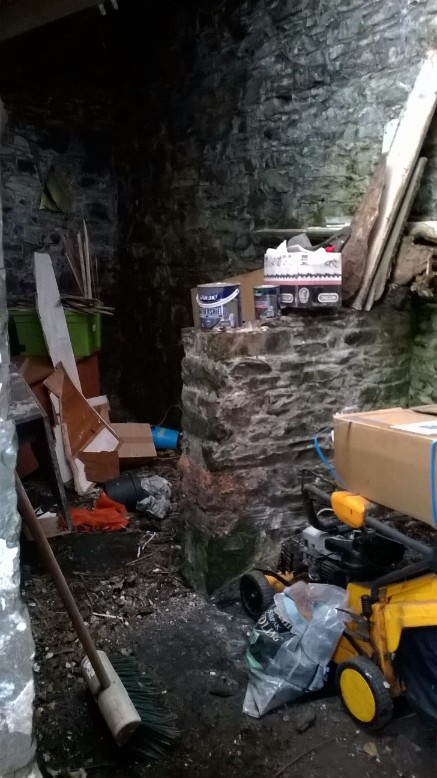 More evidence of – THE FLOOR! Again in the larger stone shed – the other thing I found as I was clearing this out was a fair amount of coal from the previous occupant. 2 small sacks and counting – I’ve still got the other side of the dividing wall to deal with but the bulk of the work is done. In the “behind right” corner from this picture there’s an old cauldron – Chris thinks it’s likely to have been where the pig feed was cooked up (the dividing wall potentially being to keep the pigs on yonder side). It’s a fully shed, this, with it’s curved wall and small triangular window but having spent a chunk of time in it clearing it out, I was beginning to think it could become a steamy bath haven. With, well, you know, a bit of work… (Editor’s note: this is not one of our highest priority transformations for the house.) 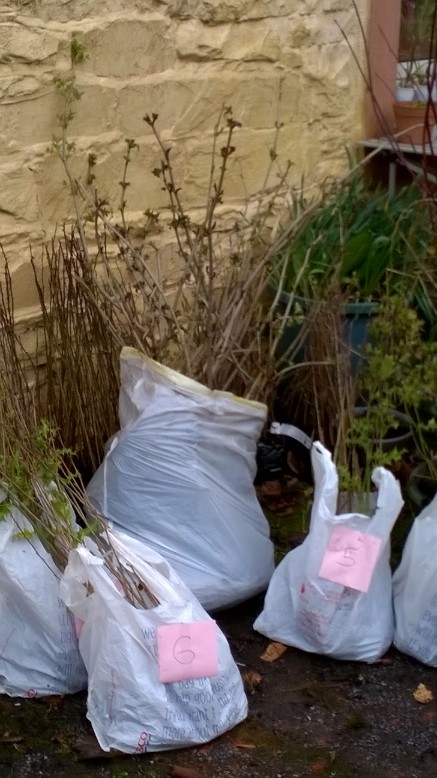 The unlabelled bag middle back? That’ll be a sack of elders. Which almost didn’t fit in the sack. And isn’t all the elders that came north in Feb 2016. In a single paint tub. Plant growth is AWESOME 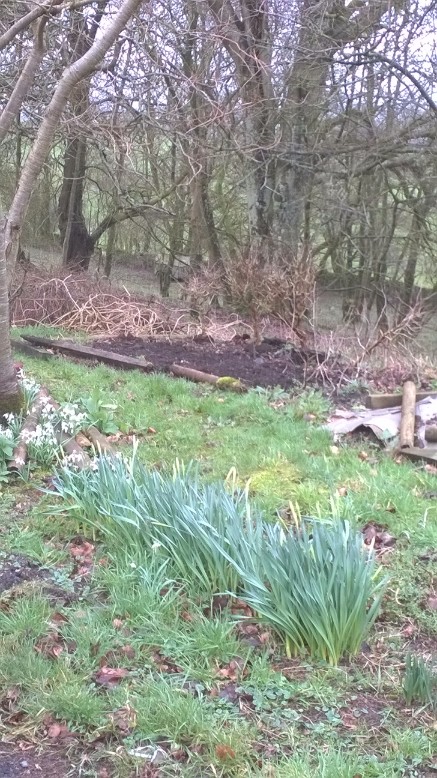 A better shot of the tree nursery (showing, well, the emptying tree nursery). One of my personal aims is to have emptied the tree nursery entirely by the end of March – it’s far too easy to let small trees in a tree nursery turn into big trees that need BIG holes dug for them. And as someone who doesn’t really like digging big holes, that’s something I’d like to avoid 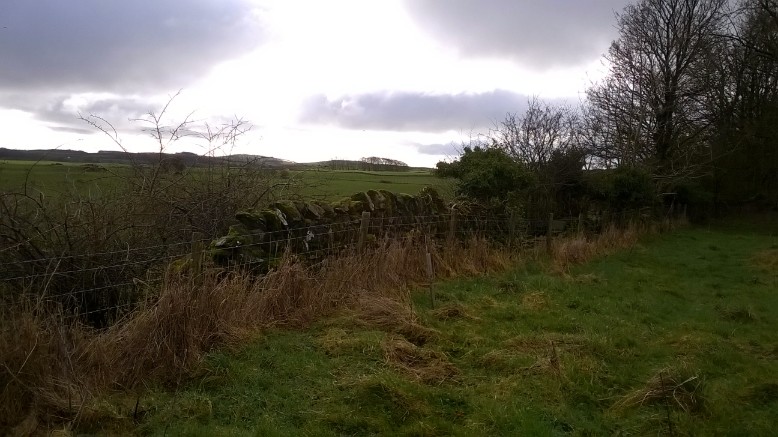 Looking out over the fields from the bottom of the bank beneath the other houses along our track. Immediately behind this is a big patch of daffodils nestled in the bank 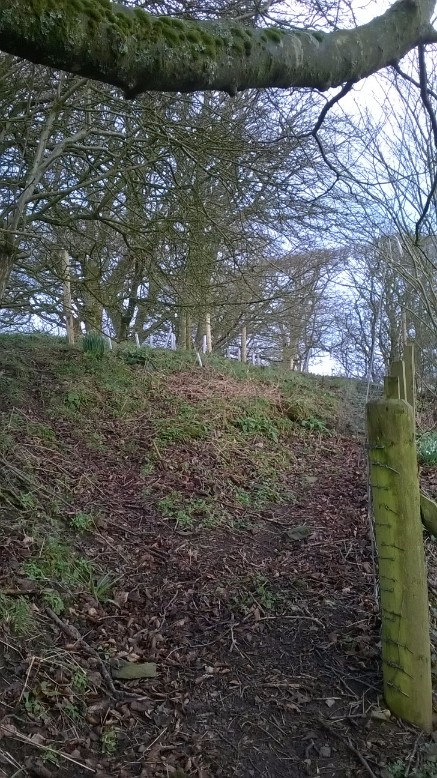 In addition to all these fun and games, Chris, Tim the WWOOfer and a local tradie and friend (Jem) installed a new hot water system which means we’re now using the old 1920s range to heat our water and, much more importantly, heat our kitchen! Not quite sure how I missed taking photos of any of this, but I did. Apparently. Maybe they’re on the other camera. Ah, the other camera. A job for later on.

The other note is on how we did our tree planting (and are going to do most of the rest of it) – we ended up going with cell-grown trees from Alba Trees and wherever feasible (e.g. where it wasn’t horribly stoney) were doing “T slits”, effectively two digs in with a spade which form a T, the joining point being eased up so you can then squash the turn down again around the trees. Chris has used it before and I certainly prefer it to hole digging when it’s a viable option. We also got 5 fruit trees in the ground. Hurrah!

Other things probably happened too, but I forget what they were and soup-making and swimming-pool-and-fixed-bicycle-collecting are calling. Onwards with the day!