I’ll be setting the date for this post back to some time in April for chronology’s sake, but the truth is: I’m posting this on August 2nd. 2017. (I have a friend who is “three years behind” on her instagram, for the sake of chronology which can’t be “fudged”, hence specifying the year!) The past four months have been unexpectedly rollercoaster-esque and are likely to continue in the same vein, but in an exciting (but scary at times) way, rather than a mainly-scary way. Which is, to me, my experience of rollercoasters (the former, not the latter).

I’ve attempted to post some of my backlog of photo journals several times over and been beset by various technical blocks, along with inertia and procrastination. So this post represents, in many ways, success on many levels. And without further ado, let’s begin.

April 2017. What a month! (Aren’t they all?) Headlines: Easter (which rather passed us by), WWOOFers Jeremy & Clare (NZers again) and another NO HANDS Master made at the final assessment opportunity for the 2017 cohort: bringing the incredible total to TEN new Masters in a single year. That compares to it taking 5 years to get the first ten NO HANDS Masters. But that’s another part of my life. Lots of things happened, very few of which got captured in photos (or my mind – so much is going on!) as my photography muscle is still fairly weak and I don’t automatically reach for a camera. But here are the ones that got captured. 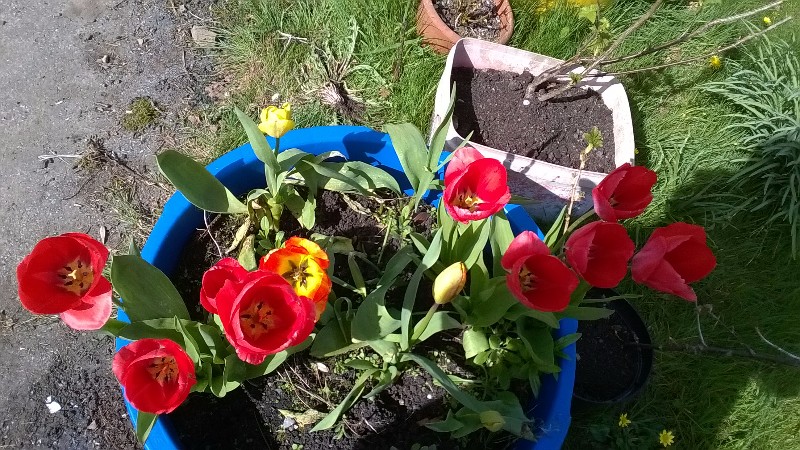 Still plenty of daffodils in April but they have been captured in the Daffologue – I do so love the tulips when they’re out, tho’! 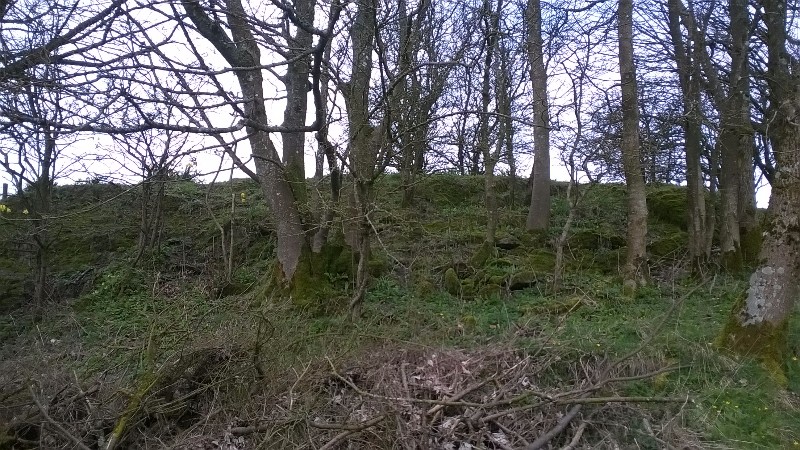 At our most southerly boundary this is the view from the “middle” of our land, up the bank towards our top (westerly) boundary. It’s an interesting slope, through which runs a very old track, and although sparse here gets a beautiful selection of wild flower colours coming through as the Spring progresses. The brash at the bottom is from the 2016 clearing (of spruces felled before we arrived) 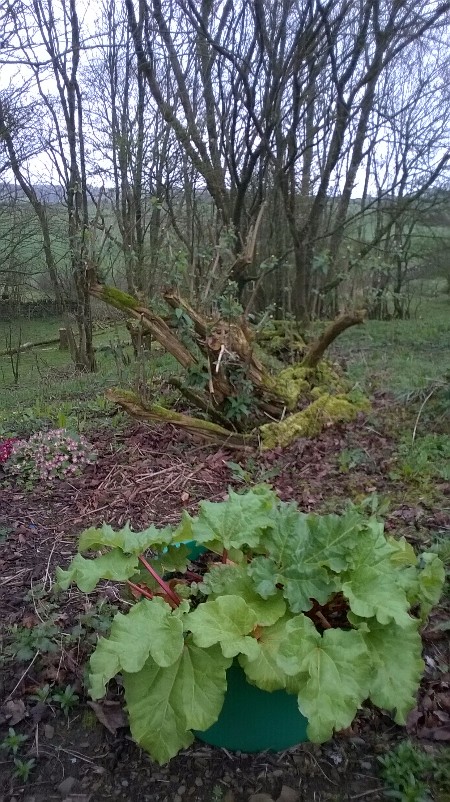 Last year this buddleia got a very severe pruning – it had grown several branches that had created loops – growing up, falling to the ground, then reaching for the sky again…and repeat. Chris cut it right back and it’s very happy now on the edge of this piece of land just next to the drive and the front door. The rhubarb came from Chris’ old community and is now in the ground – it got a bit shocked when we planted it out but we’re hopeful it will recover fully in time 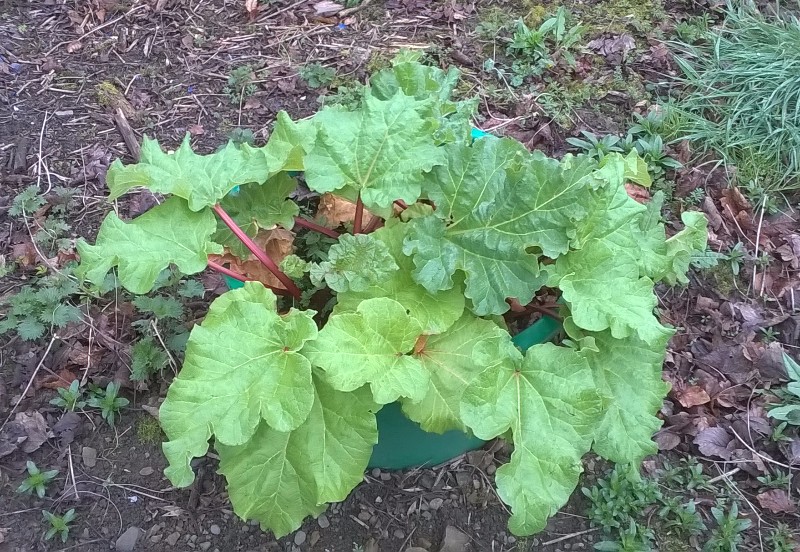 Phwoah, rhubarb (don’t think we ate any this year as we’re still trying to let the plant establish) 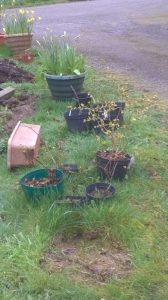 These are just some of our “fruit bush nursery” – since April they’ve all been collected on to the other half of the – absolutely flourishing now it’s August – herb bed. Easier for mowing, and helping us imagine the years to come of many berries from many bushes! Just looking back at them now also reminds me how much growth they’ve put on in the past few months alone 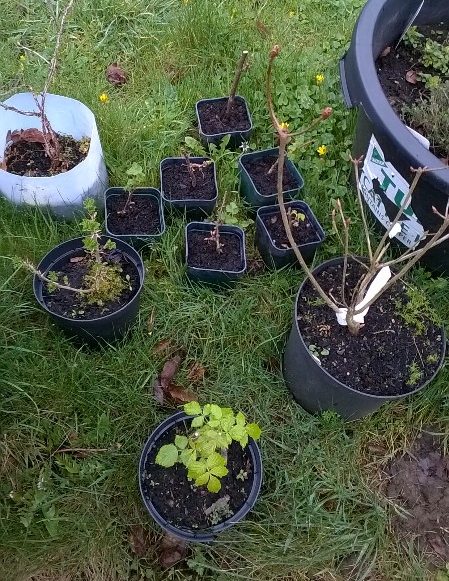 More of the fruit bush nursery – all growing happily 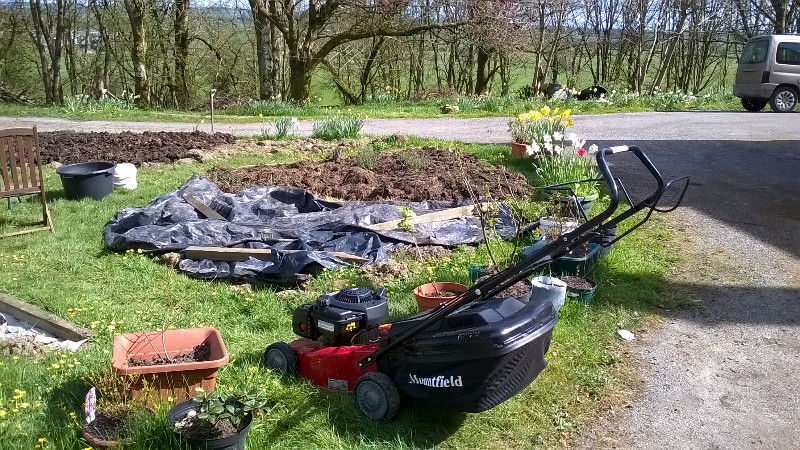 The new mower! After almost a years good service with us, the second – or possibly fourth – hand mower given to us by our postie gave up the ghost. The new mower lacks the power we had hoped it would magically have, but it’s doing pretty well. This also shows the herb bed before it came a herb bed – the black plastic in the foreground is now covered with all our fruit bushes in pots, and the bed in the background is a delightfully happy herb bed – which will appear in later months’ photos! 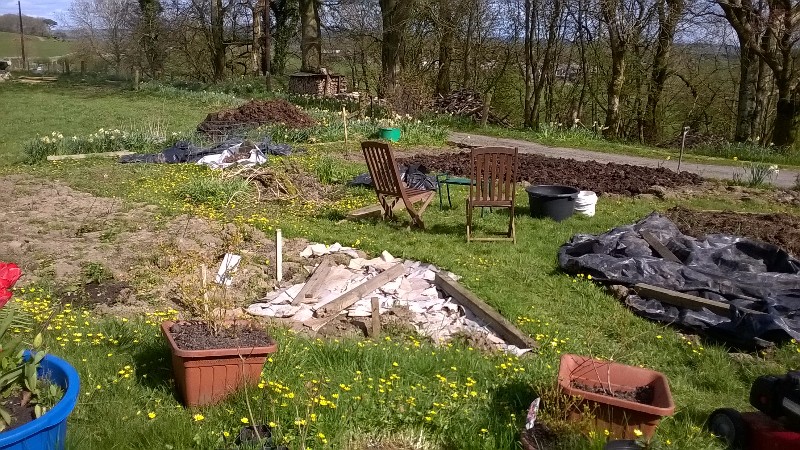 From a similar spot, moving round to view the rest of the new veg garden – thin soil, but we’re working on that. The back bed has become our potato & kale bed, the foreground bed our squash & courgette bed. And the lovely pile of muck in the background (towards the left of middle) – which arrived the same morning as we were out collecting horse muck for the potato bed! 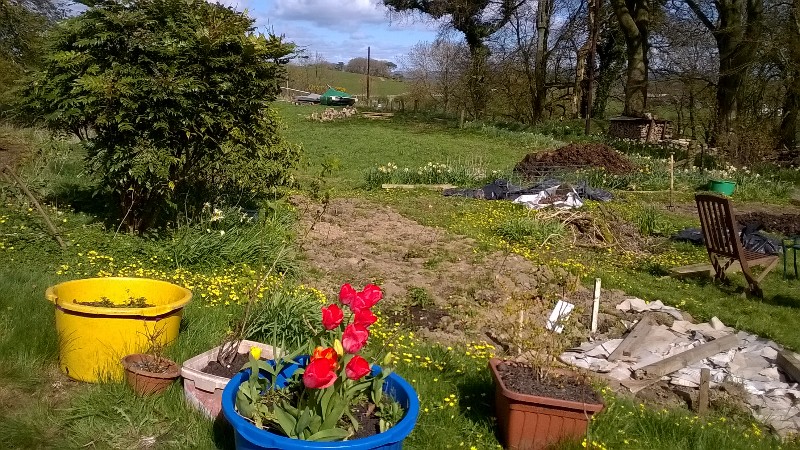 And finally – with the view up the field 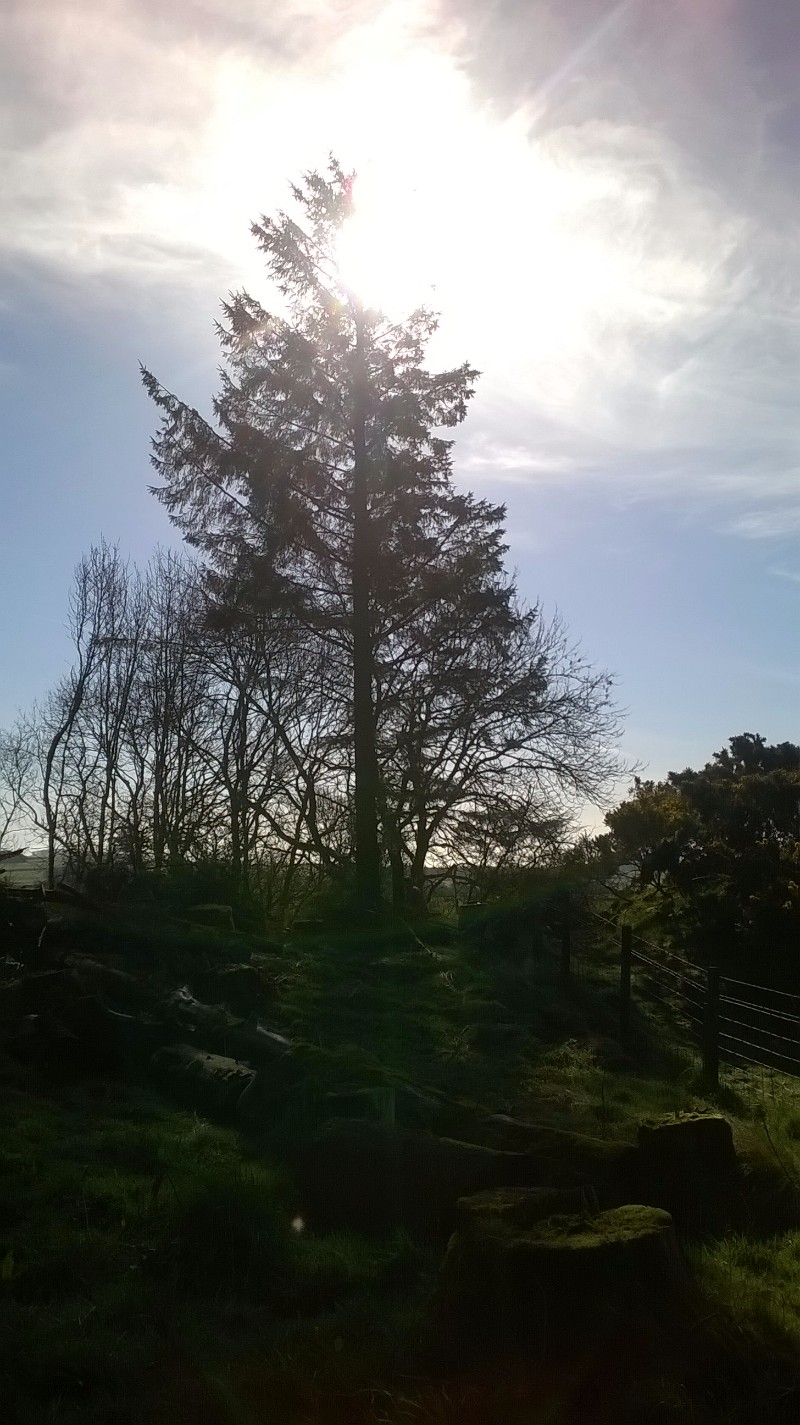 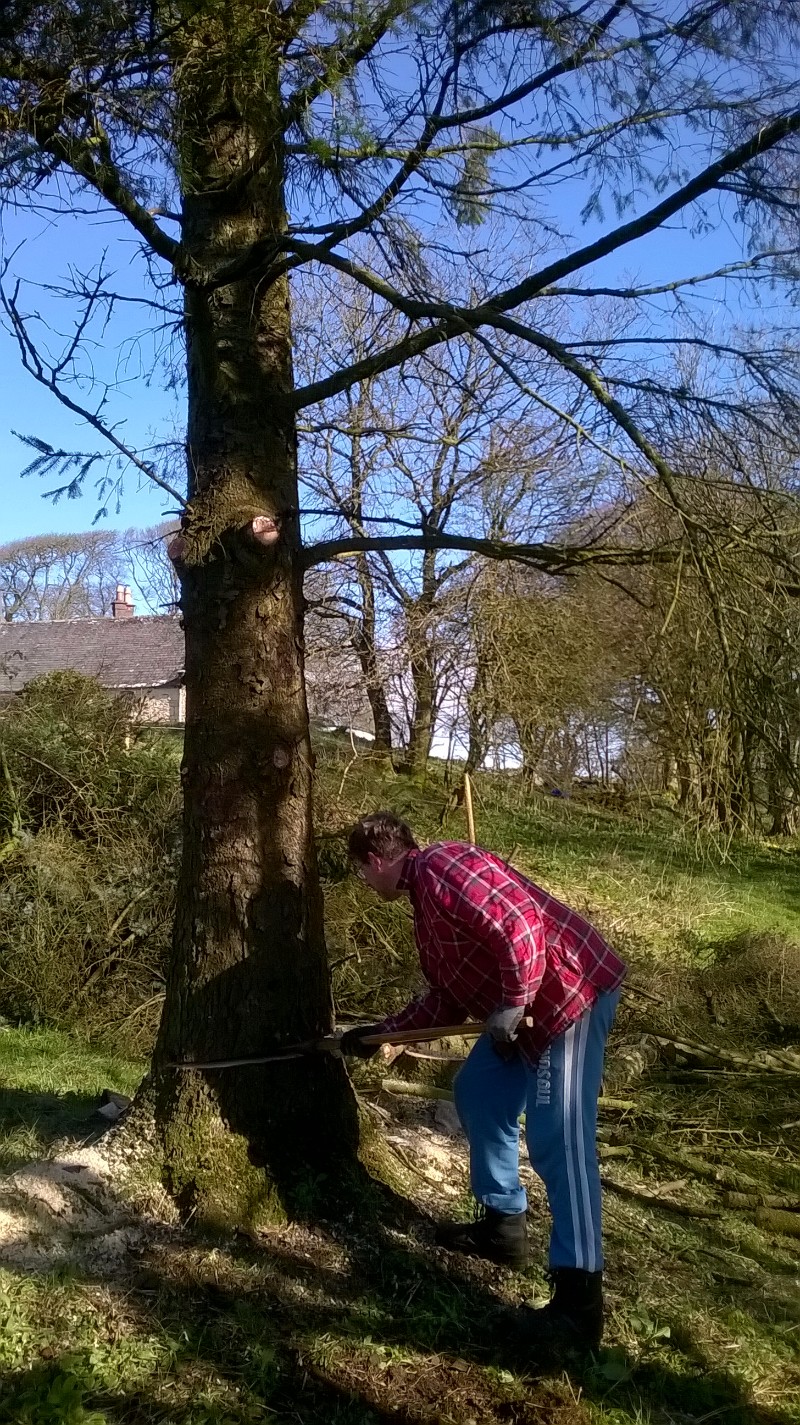 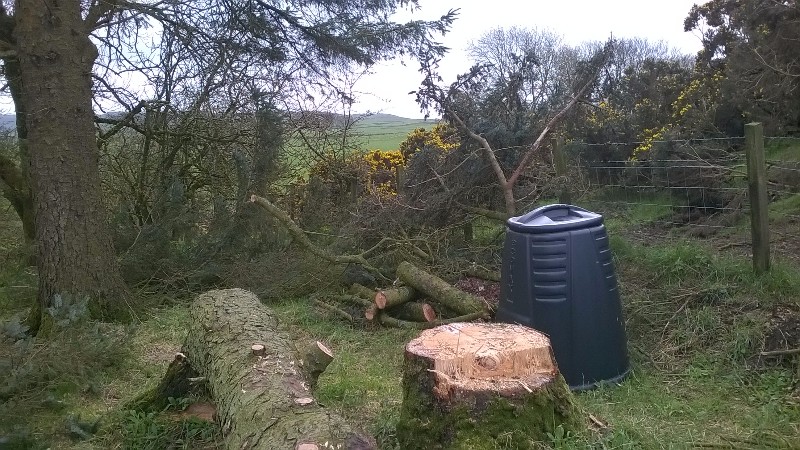 …and the resultant stump 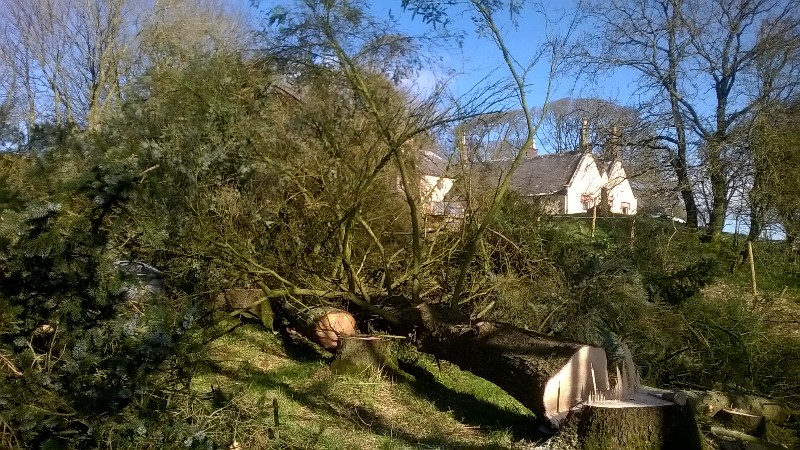 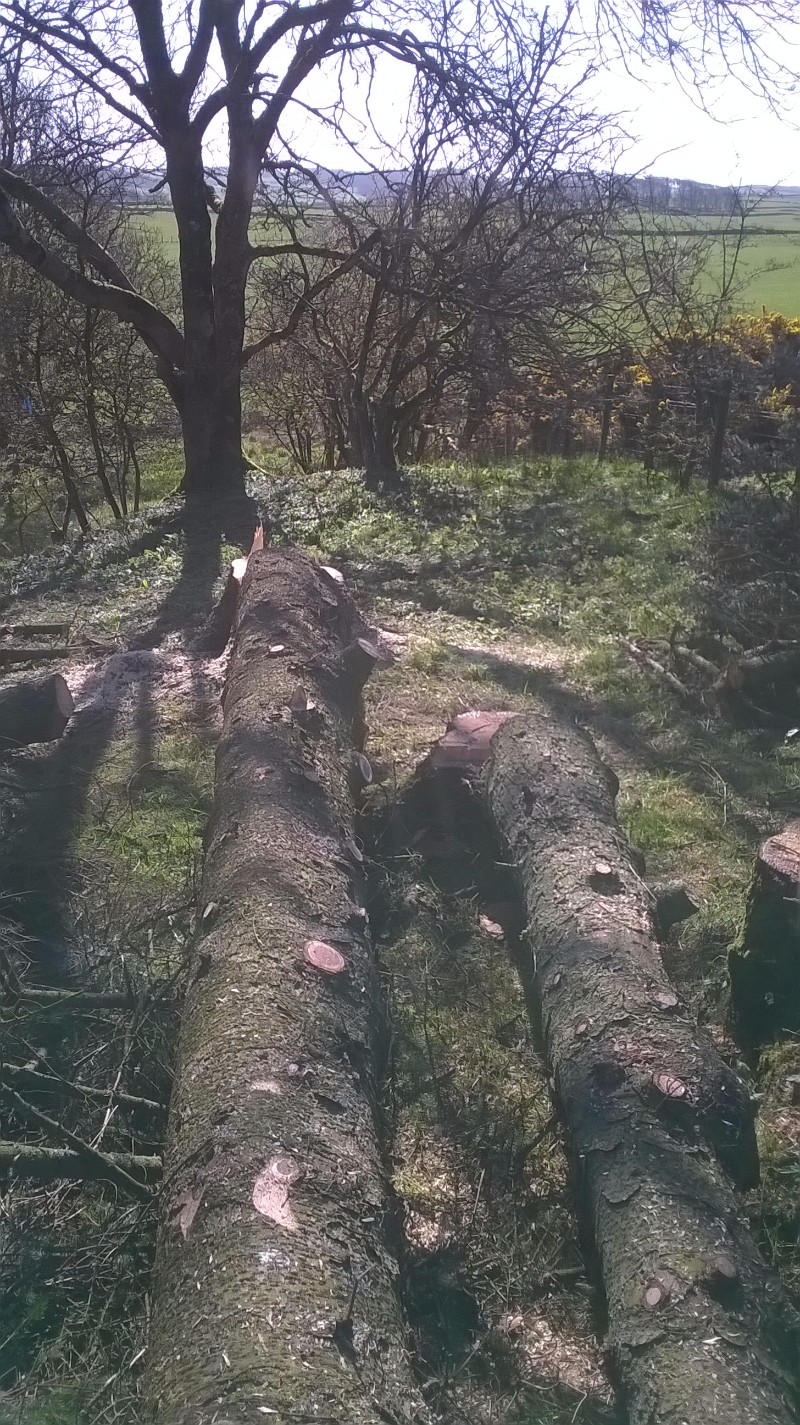 And here after being snedded – and the snedded brash being taken away for the huge pile of brash we created (and then burned). Somehow I seem not to have a photo of said huge pile! 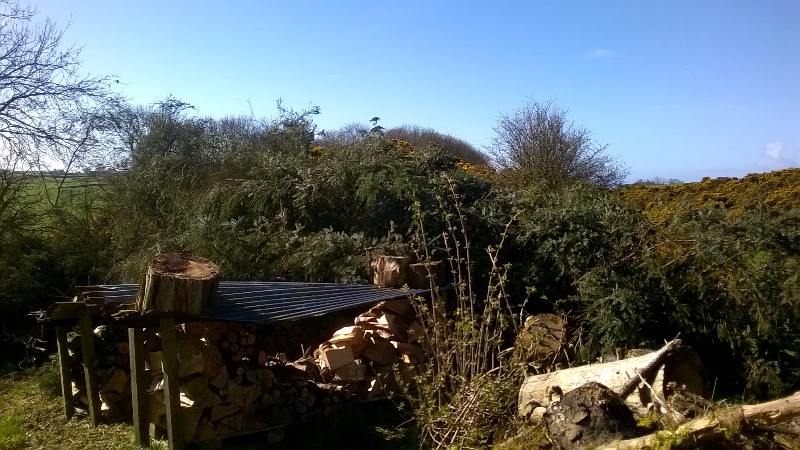 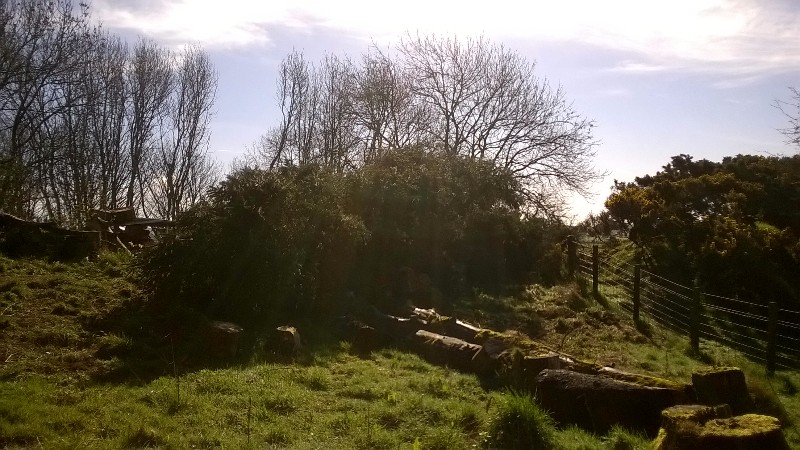 …and from the “South terrace” where the trampoline is now living 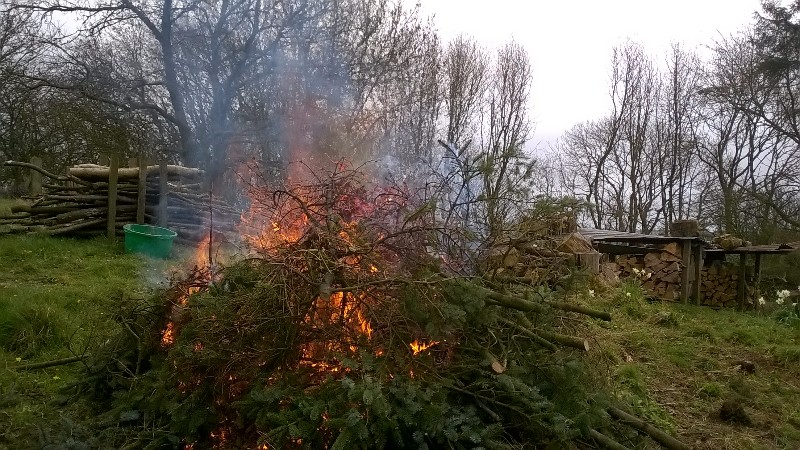 Obligatory bonfire photo – again, there was an even bigger bonfire (ably created, fed and tended by Clare & Jeremy) from the HUGE brash pile, but I didn’t get a shot of that one…at least not one I can find! 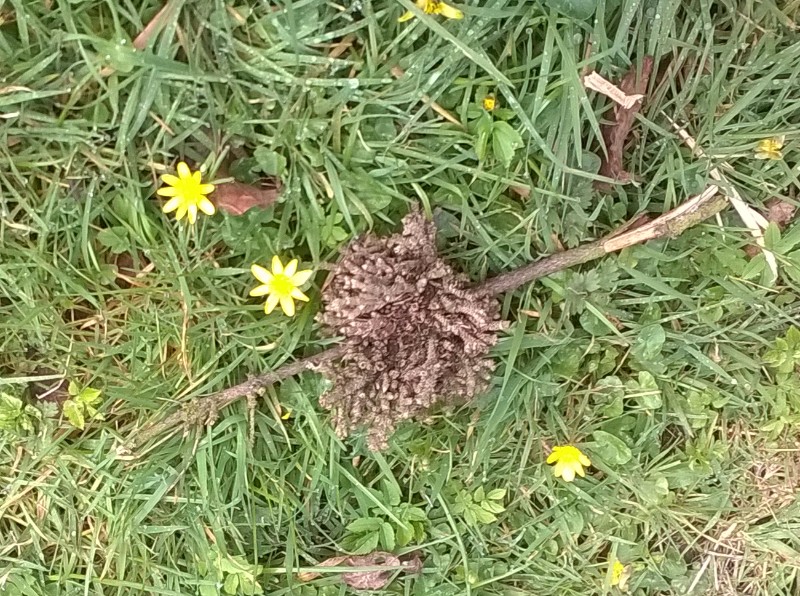 It feels like this post would be incomplete if I didn’t mention the heroic work Clare & Jeremy did shifting rounds of spruce that had been felled across to our new wood processing place, along with the weeding they did of a bed which we’re hoping to make into a “pretty, garden, flower-filled bed” just outside the library window and the shell-filled bed outside the window with the view to the sea (from the workshop / armoury / possible future kitchen diner). Hard workers and good company – just what we like!