July was Hot. And Sunny. And DRY. So a lot of watering went on. I confess I hid from the middle-of-the-day sun as I don’t do very well in the heat, but it really was lovely being able to pop out and get properly hot. Thankfully the dryness didn’t do too much damage to the garden (some of this year’s saplings didn’t make it through, but we lost significantly less than 50% and generally in the spots which it was going to be hardest for them to thrive in anyway) and the precipitation has returned now which is helping things plump up. But “now” is August, and this post is all about July…

So, let the random-assortment-of-photos-I-remembered-to-take selection begin! 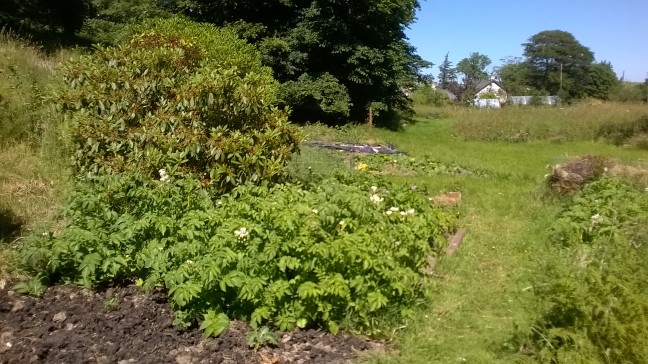 The current “far edge” of our veg garden, with the potatoes in the foreground having a very merry time. This was a “just before I got the lawn mower out” view and before the grass started getting super dry… 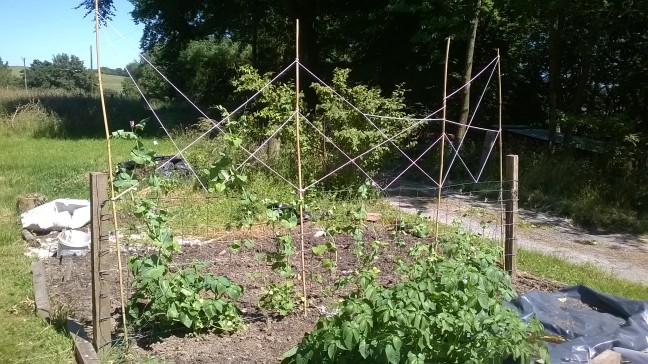 I was given some purple-podded sugar snap pea seeds at the beginning of the year and having set up a basic framework for them, I extended it with a rather fun “spider’s web” on some bamboo canes. Very much the beginning of the month…this structure is now very much laden with growth 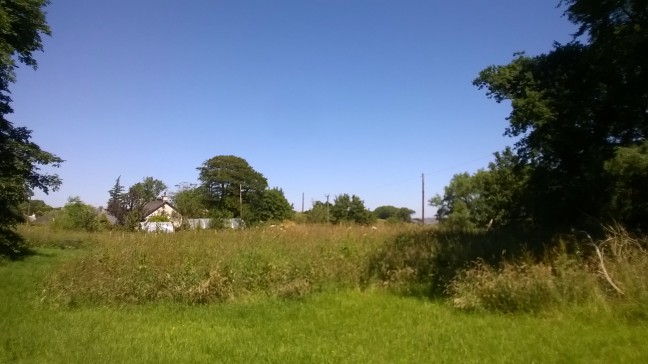 Check out that sky! This was the kind of brilliant blue sky we had for much of July and was very much a snapshot. In the foreground on the right you can just about make out the pile of brash I’ve been bringing up from our “lower level” in anticipation of getting a big chipper (at some point) and, well, chipping it all. My mowing is continuing to encroach on the meadow-y bit of this section of our land and although at one point this year I thought I might strim the whole section to see the shape of the land, that hasn’t quite happened – although there’s significantly more “lawn” now than there was 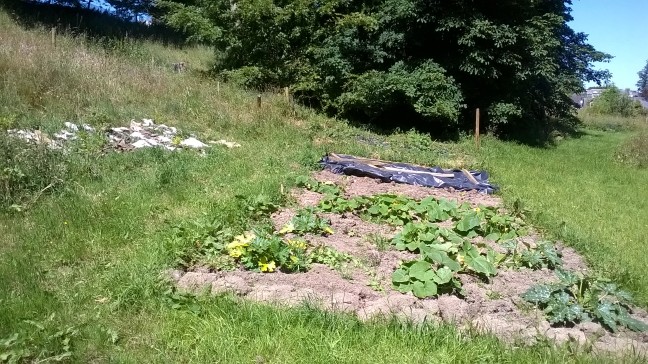 On the right is our future polytunnel plot (this year hosting our squash and courgette plants) and to the left you can just about make out the cardboard mulch around our 6 blueberry bushes. 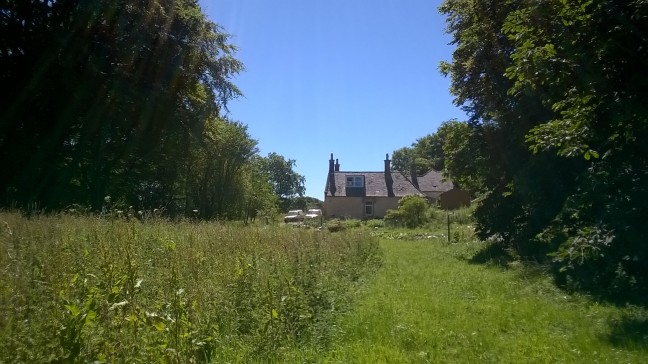 Again: the sky! The sunshine! This time looking up towards the house through the “lawn corridor” 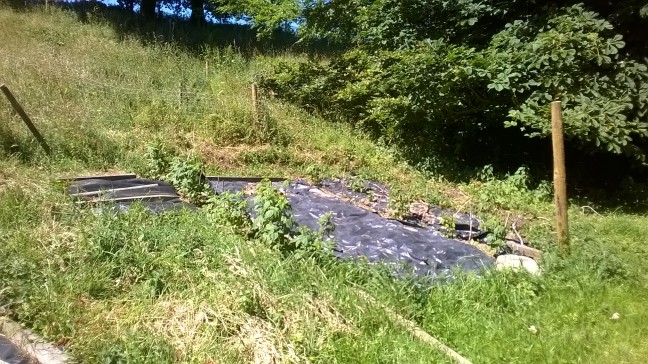 Partially mulched with black plastic, we planted two rows of (two varieties of) raspberries, 10 in each. One did significantly better than the other (70% of the canes taking, versus about 50%). I’d tell you which variety was which but the book with that info in is, well, out of reach just now… 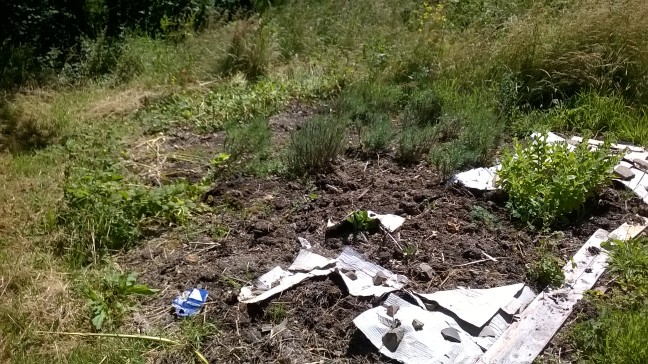 One of the first beds we created (just beside the drive outside the front door), this was post-weeding. A number of perennials had got rather lost in the growth and this particular weeding gave a new lease of life to one of the three original magnolia’s Chris got me our first year here (sadly the other two have given up the ghost, but that any of them survived is amazing). You’ll begin – if you haven’t already – to see the cardboard mulch theme spreading. We now regularly pick up cardboard from the village pub (works for us, works for them) so gradually more areas are getting mulched in an attempt to give root-space to the plants we actually want to encourage 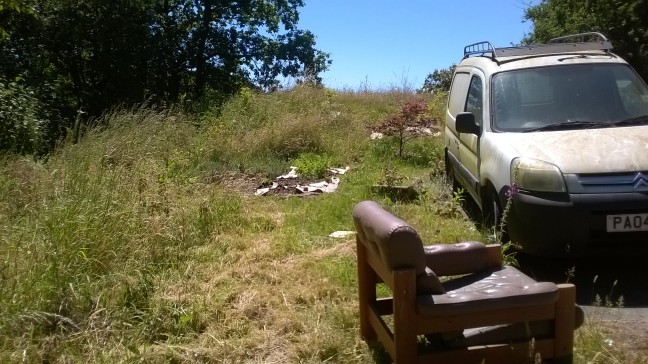 Here you can see the previous bed in the background. plus the “was being kept for parts but hasn’t quite made it to the scrapyard now it’s definitely not needed for parts” Berlingo van and an armchair which had been in Chris’ workshop but got ejected. It’s now gradually becoming part of the garden furniture (and an excellent spot for doing shoes up and the like) although whether it’ll last the winter remains to be seen 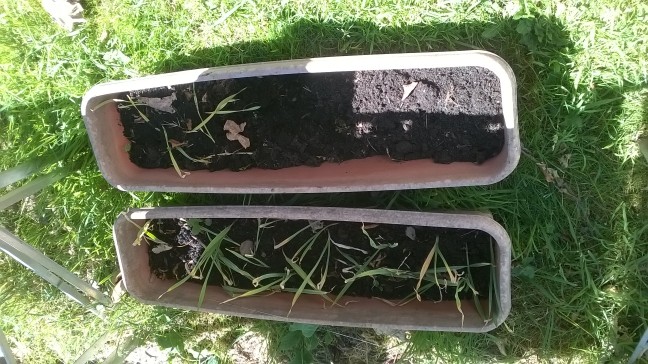 Babingtons! These are the last of the Babington’s leek seedlings I grew. I’m hoping that, despite their mistreatment this year (they really could have done with being in the ground) they will live to grow another year and start offering up their leeky perennial goodness in future years. These remaining ones (after giving away a LOT to local – and further afield – friends) have now gone into various beds in the hope of resprouting next year 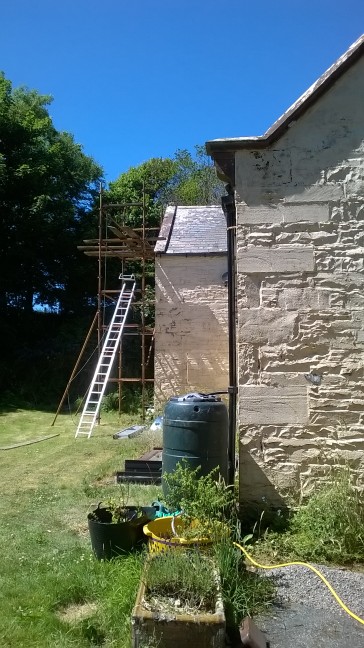 Two rather exciting elements here: first up, the water butt. This had been in Morecambe (although hadn’t been in use for a while as it had become rather pigeon-poo-rich and so the water was just too stinky to use, even for house plants) and was, in fact, in the last load to come up to Morecambe in the Golden Chariot. I was particularly delighted that the day after it arrived on site, we took it out of the car and installed it straight away. Very satisfying! In the background you can also see the scaffolding Chris and I erected for him to do some repointing of the stones lining the edge of the roof above our bedroom. We’re fairly certain water has been seeping into that wall for some time and are hoping that Chris’ maintenance will mean the wall can begin to dry out properly 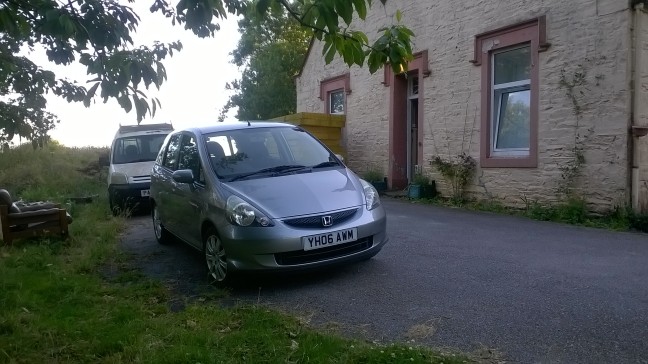 Farewell, Golden Chariot: Hello, Honda Jazz! With about a week to go before I was off on a 10 day trip (Morecambe – Oxford – Cambridge – London – Derbyshire – Galloway) the back axle on my Berlingo went and it was time to bite the bullet and get a new car. Chris was great in accompanying me as I went on a car-buying-spree and we ended up with this one, which we saw at the beginning of the day and which was located…at the end of our drive, just in the village. Very convenient for a second look and, ultimately, purchase. Going well so far 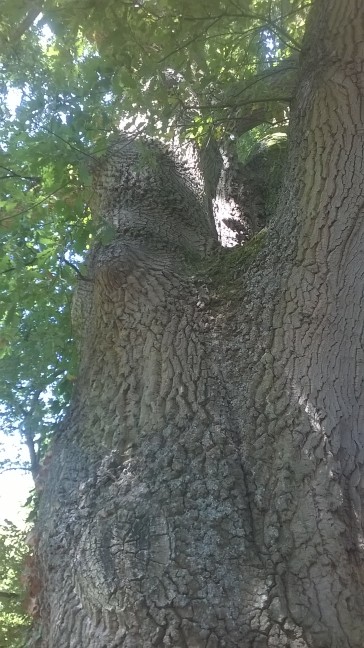 I confess, I forget where this tree is. But it’s gorgeous. So it’s staying… 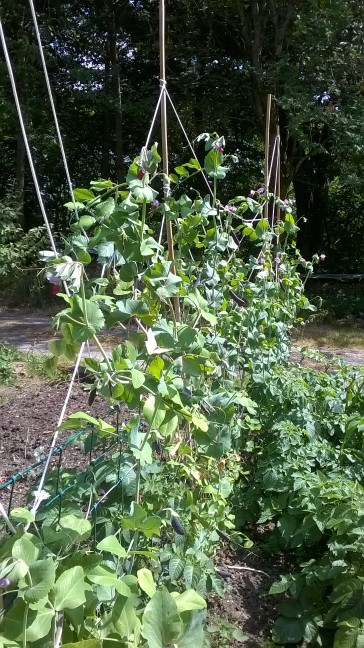 Remember that pea-web from earlier? This is later in the month after the peas have really got started 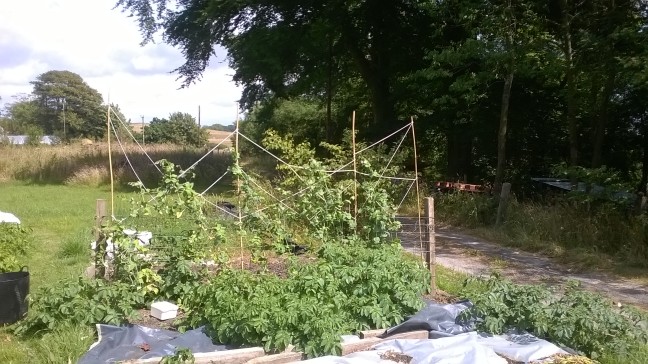 A broader view of the getting-more-heavily-used pea-web, just to the left of our driveway 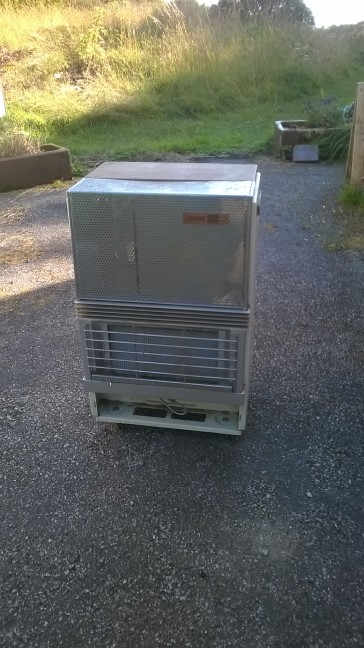 This photo was mainly taken in the hope someone may have a use for this (we advertised it on some local free/for sale groups but no-one was interested: so it’s now gone to the metal recycling) but also represents two very exciting moments. 1) Clearing out the build-in cupboard in the spare room of stuff we thought we *might* use when we moved in but have now decided to say goodbye to. 2) The discover of a gas bottle the same size as the one we use for our cooker which means we now have a spare so need never run out of gas before being able to get a new bottle filled again. Yippee! 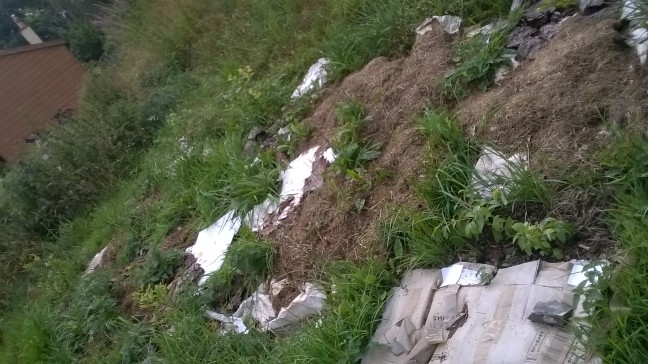 Somewhat late to the party, but in July I started putting grass cuttings straight on to areas we’re mulching – this is the blueberry patch. It’s a balancing act between adding to our compost heaps and using the cuttings as instant mulch (and longer term “in situ” compost) but was particularly useful for the exposed soil on the squash patch as a way to try to keep at least some moisture in the soil with the incredibly hot (and unrelenting) sun during the heatwave. Definitely something we’ll be doing again next year 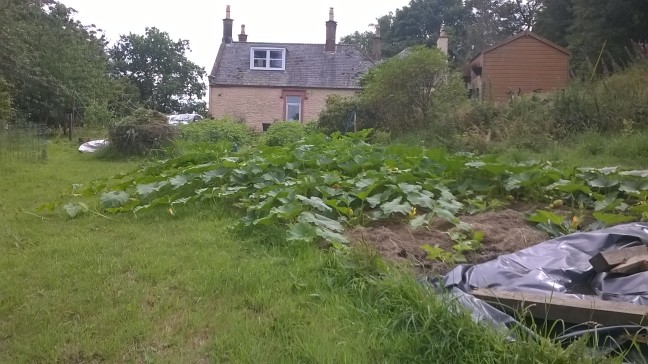 The squash patch, looking the other way from the earlier photo and with many of the squash having really got going. We did keep the plants watered during the dry spell which they really needed and which means we’ve had the usual bumper crop of courgettes (and have plenty of squash continuing to grow happily) 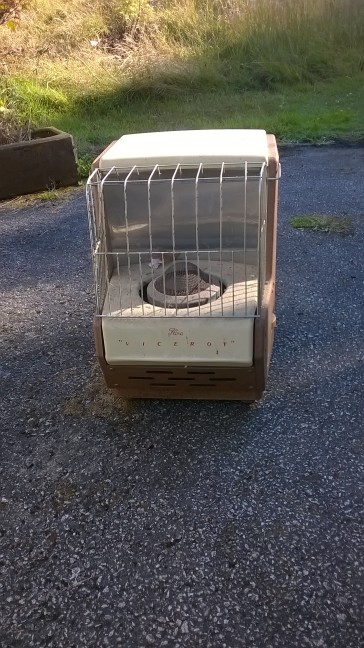 Another find in the spare-bedroom cupboard, this time a paraffin heater. I can’t quite bring myself to take this one to the metal recycling yet but we know we won’t be using it. I’m still hoping *someone* might want it as a vintagey-interesting piece (do get in touch if that person is you!) 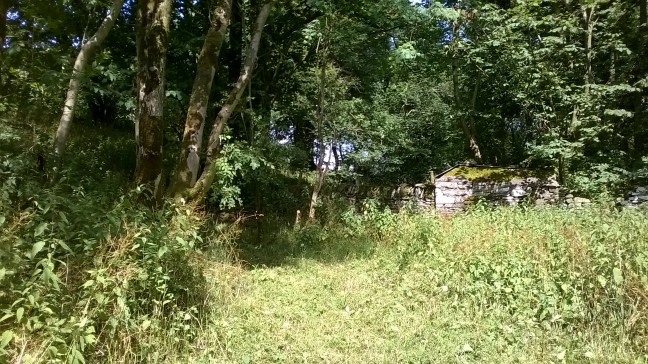 Adventures in strimming found me clearing the nettles and grass and docks down in the old vegetable garden (where we also have the row of ash trees we’re gradually coppicing). This was the first swathe I cut – I did the whole area and mowed most of it too 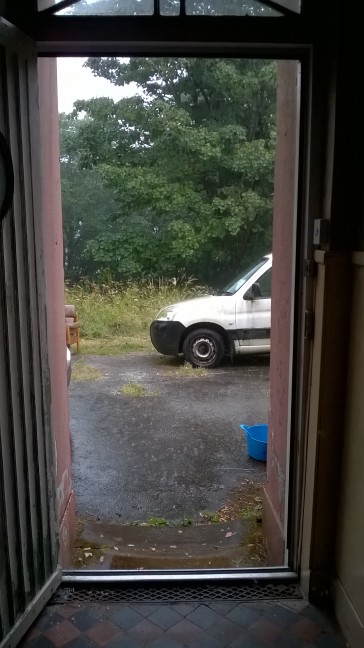 And then the rain came. It was epic. And so welcome! 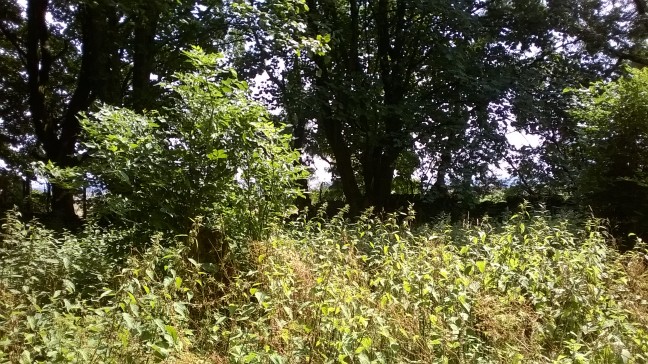 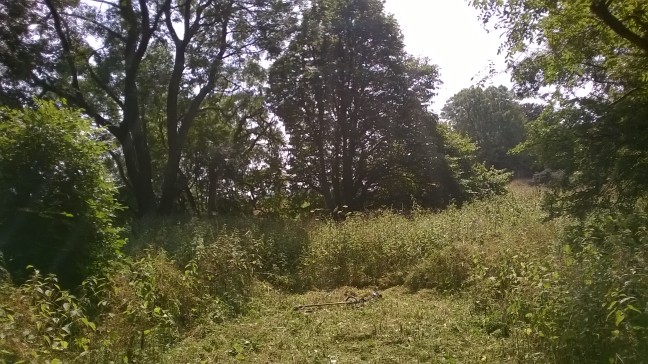