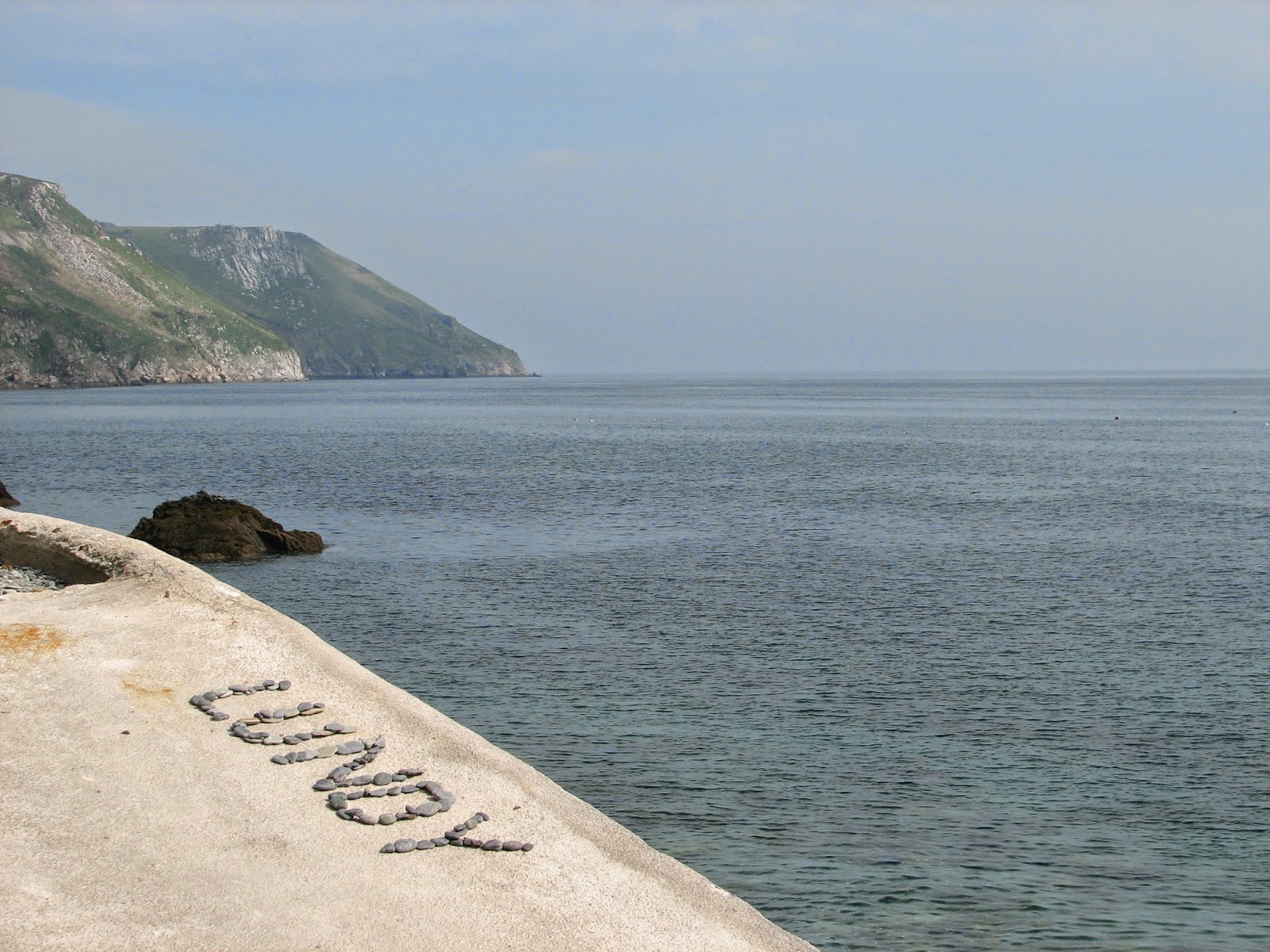 Today I learnt an important lesson that I’m going to share with you:

A day trip to Lundy Island is, quite simply, Not Enough. Islands have always held a certain fascination but Lundy is one I’ve tried to reach several times and never quite made it. And yet today I overcame the difficulties and had a wonderous day. So wonderous, in fact, that I managed to confuse my bearings so much I thought I was walking South down the island when, in fact, I was heading North! As it turned out even that had its benefits as I got to the northern-most lighthouse and although my return trip was pretty much straight down the middle (I’d walked up the East coast) getting up to the North of the island felt like an achievement in itself. 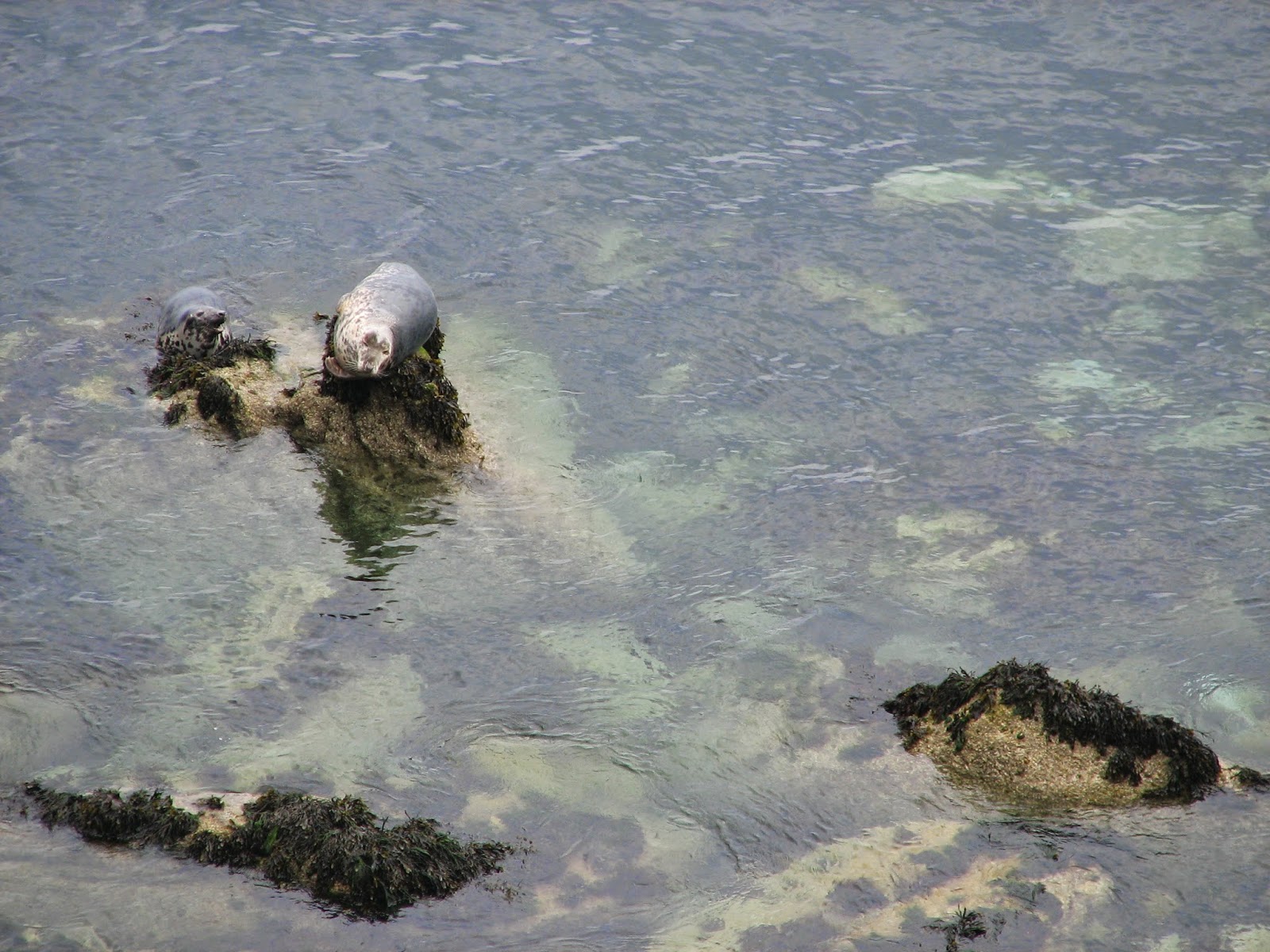 But other than that – where to start? Measuring just 3 miles by half a mile, Lundy is a protruding chunk of granite in the Bristol Channel, 10 miles off the North Devon coast. Now owned by the National Trust it has a small number of residents who service the 23 holiday properties on the island. And. It’s. GORGEOUS. My northward walk was mainly done barefoot through ferns and grasses and wild flowers, with some sika deer and seals thrown in for good measure (at a distance, but there all the same). The path I was on terminated at Gannet Rock at which point I followed what I’m now thinking were mainly deer / goat tracks up to the top of the island. And somehow doubled back on myself in such a way as to think North was South and South was North. Either that or my makeshift sunhat (my scarf: see aforementioned leaving of sunhats in the car) wasn’t working too well and I had sun stroke. 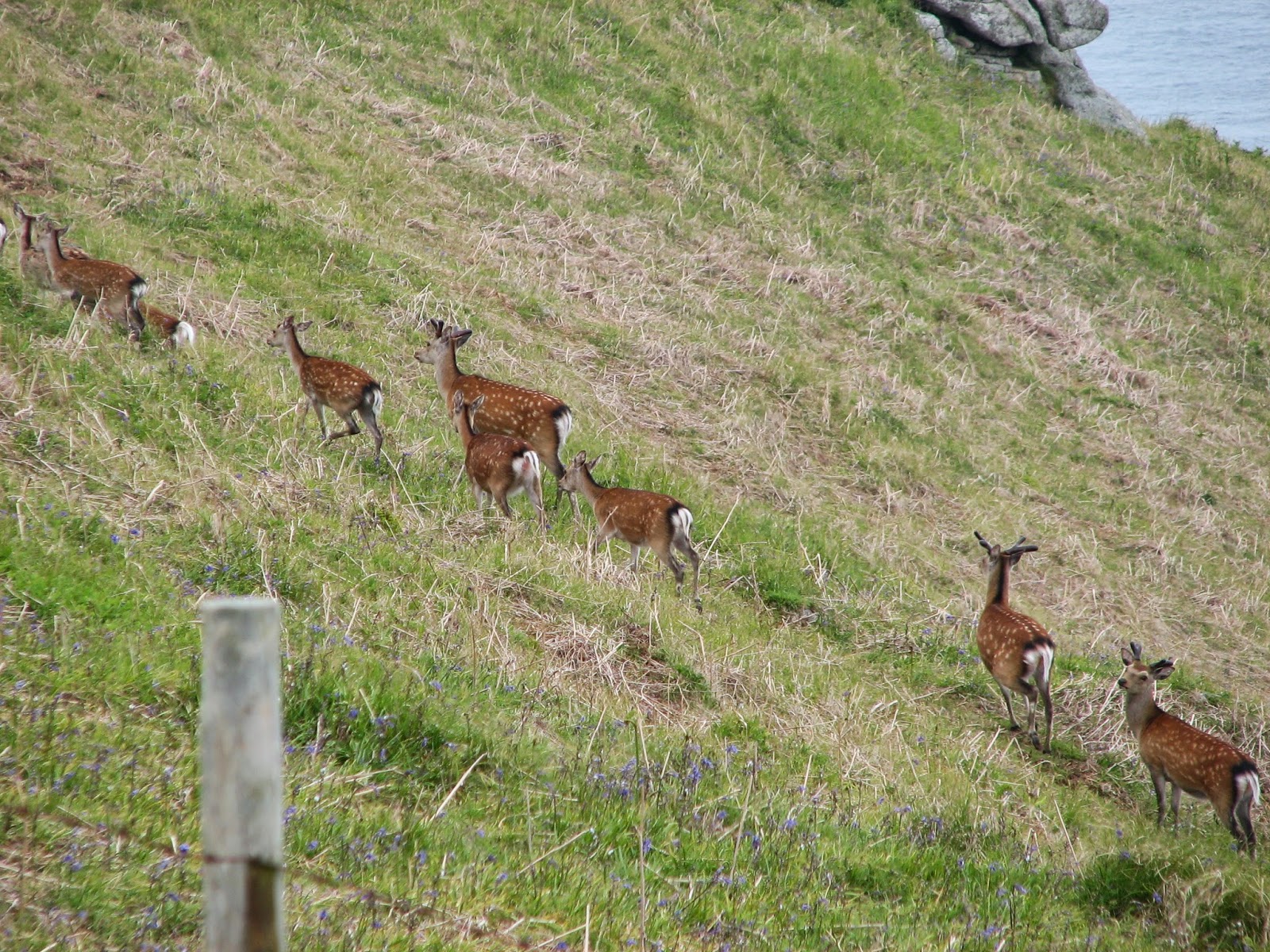 The day started out overcast, got sunny for a bit, went overcast enough that I didn’t keel over in the sunshine and has ended hot and sunny and glorious. I almost went for a swim but didn’t want to miss out on the round-the-island cruise that was happening before we headed back to the mainland and the shallows seemed to extend quite a bit from where I was. I did, however, get my feet, head &amp; hands wet. Of course. I haven’t had as much ambling as I’d like (there was some distinctive Walking With Intent today to make sure I was in the right place at the right time) but as a future ambling location Lundy excels itself. Ups and downs, landmarks to find, birds, plants, deer, seals, ruins, lighthouses…brilliant. 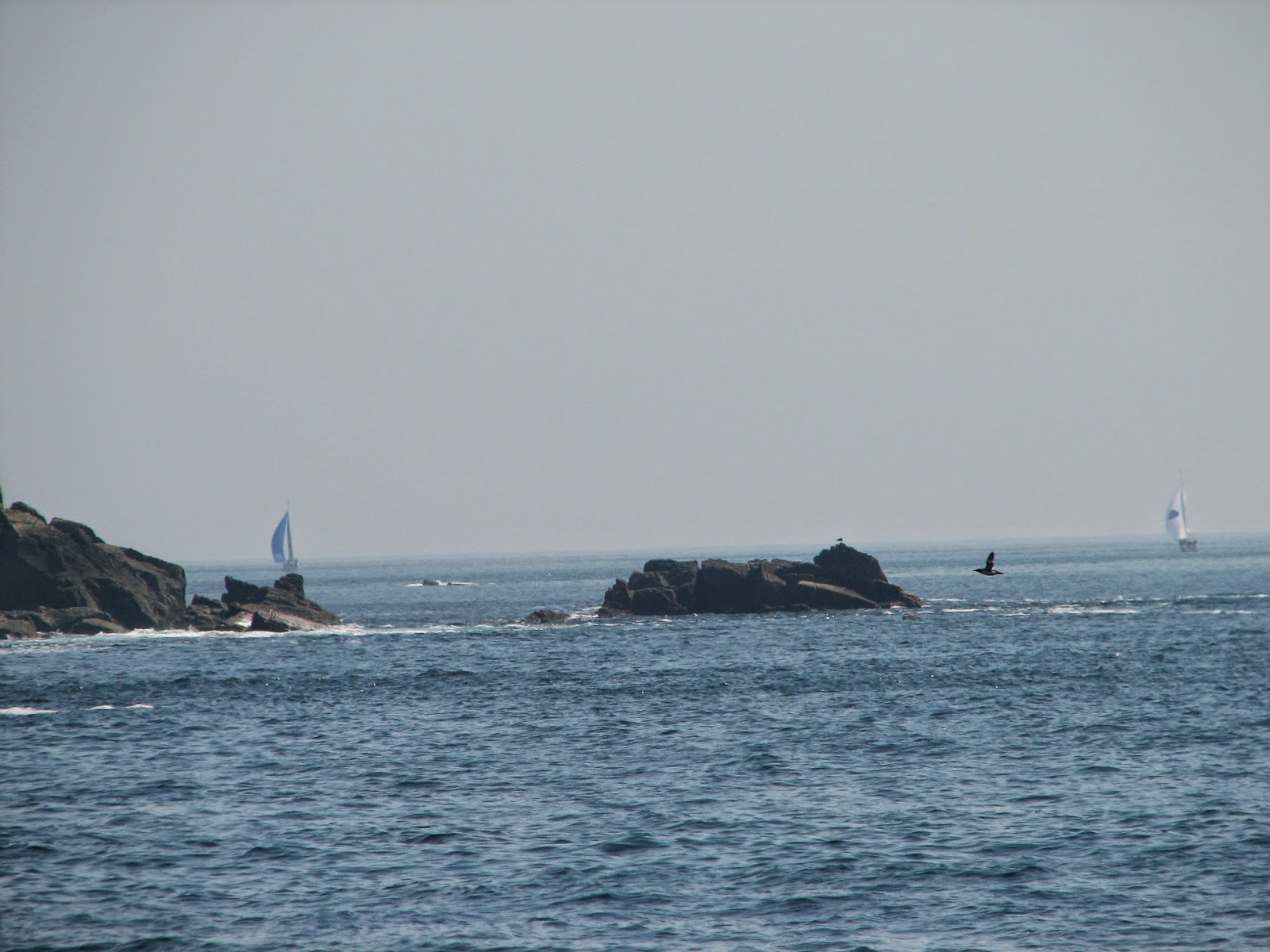 The cruise round the island was also a real treat. We saw a number of sailing boats competing in the annual Ilfracombe-round Lundy-back again race – which, although annual, often has to be cancelled due to bad weather. Not today – not sure what the wind was like for sailing but in terms of sunshine the day would struggle to be better than this. Seeing the various landmarks on the island from the sea was great and having the various birds pointed out (puffins, guillemots, fulmars, plus all the other names I can’t remember)  was a bonus. It just wasn’t long enough! 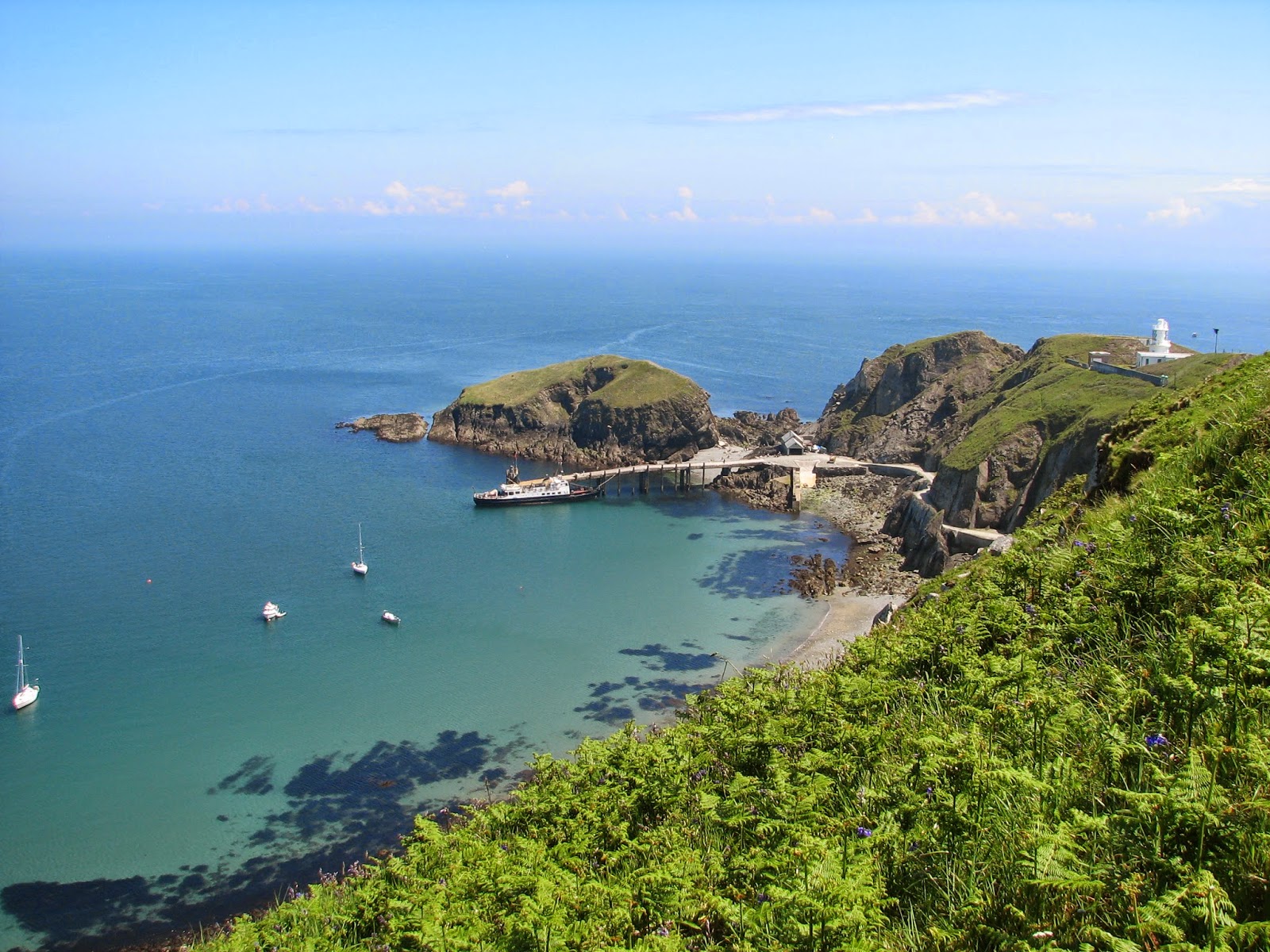 I can’t recommend a visit to Lundy highly enough. Looking down to the harbour, the sea clear and green, the sun glinting off the waves, I struggled to understand why anyone thinks that holidaying in the UK isn’t up to muster. It is. Well, it definitely is on Lundy!