The Electricity Guys (yes, they were all guys. Including all the various people who visited and called over the prior few months) They came to bury the electricity cable coming into the house and although the trench is still awaiting re-tarmacing we’re hoping that’ll get done in January. 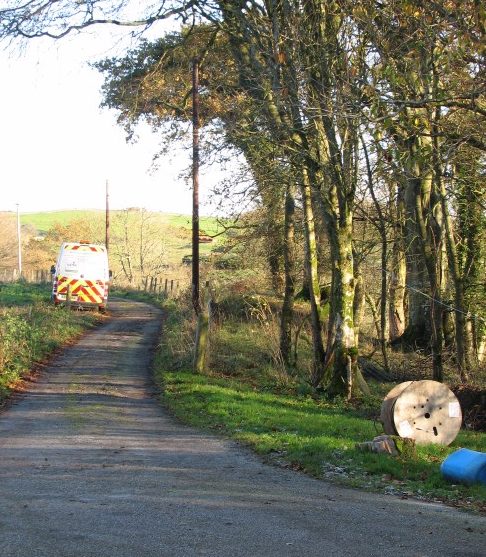 Obligatory “hazard tape” van plus a rather exciting reel of cable…oo-er. 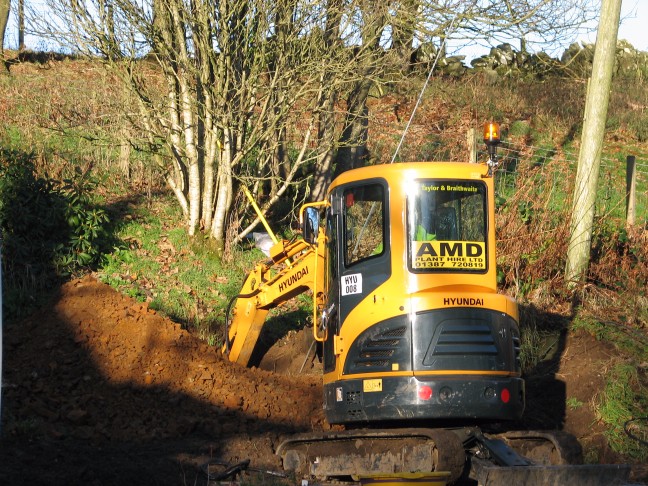 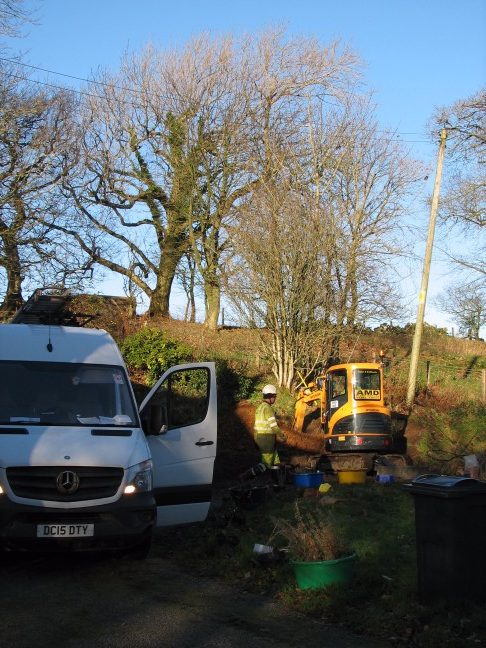 Men at work – they did, at least, have a glorious day for it

Heat! The house only had storage heaters (and a small, incredibly badly and dangerously installed multi-fuel burner) when we arrived so with Chris’ experience of wood burning stoves and their ease of installation that’s what we’ve been working towards. In November we completed the install of four burners: our bedroom, our living room, my office (I think that happened earlier) and the room which is Solli’s at the moment. 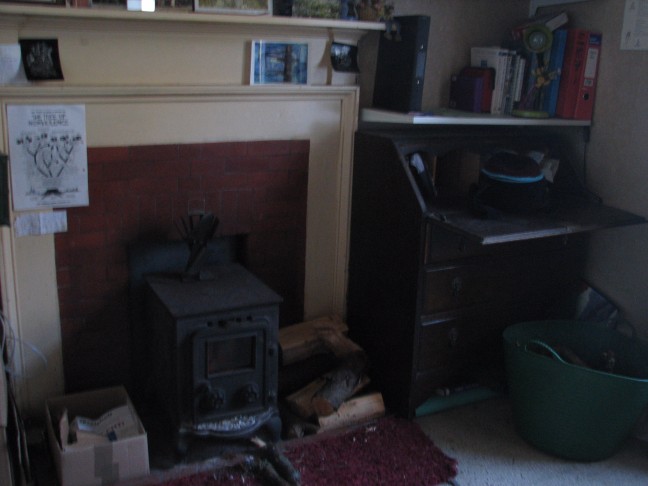 This one went in first – into my office – and is the one that was installed really sketchily elsewhere in the house when we arrived. It’s a Country Kiln and although small, does well for the room it’s in 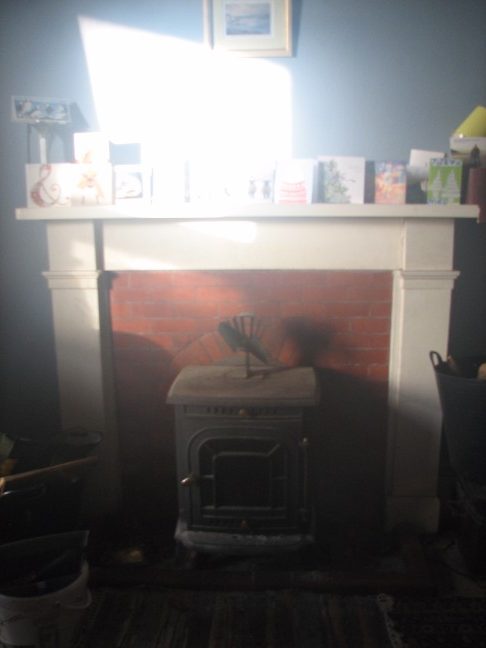 Apart from the Country Kiln, all the other burners have been ebay purchases. This one was new, but it’s not a branded one. Does OK but a bit leaky (so doesn’t shut down fully). But makes the library nice and toasty so we’re not complaining! 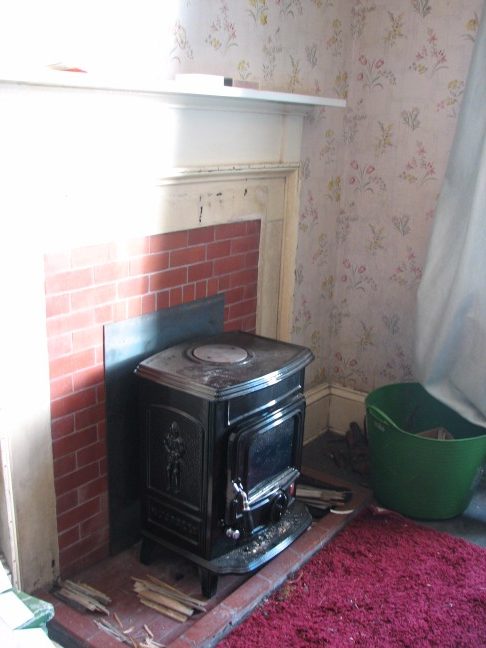 This one was brand new – but at about half the “new” price as the seller had never got around to installing it. It’s got a black enamel finish which is shiny, but it’s my least favourite burner – I just can’t really get on board with the knights – replete with swords – on either side. Not a patch on the Asian-esque sea/fishing boat / star fish combo I saw on a friend’s burner recently. This one’s in the room to the right of the front door 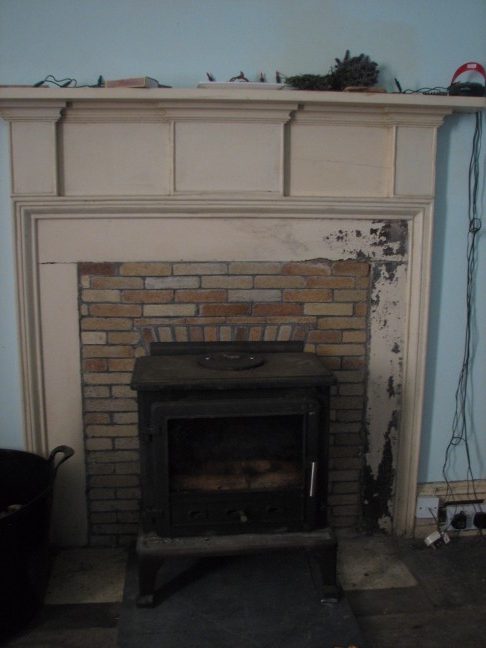 Bargain burner! This one’s up in our bedroom – and cost us the princely sum of £60. It’s a firefox

Doing some pointing work on one of the front chimneys: Chris’ skills in maintenance, along with his climbing & rope work abilities, are a huge asset. This chimney just needed a small amount of repointing – the other one (this one’s to the right of the front door as you look at the house, the “other” is to the left) of this pair is on Chris’ list for pretty much taking apart and then remortaring together. A job for the spring – and the next place the scaffolding will be going up (which gives us a convenient nudge to get the insulation installed in the attic room as it’s currently exactly where the scaff tower needs to go) 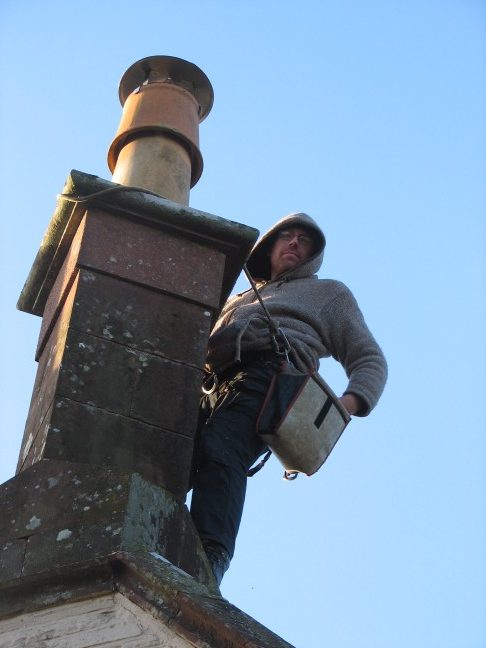 Blue skies are lovely: but at this time of year, COLD as well – hence the hood up 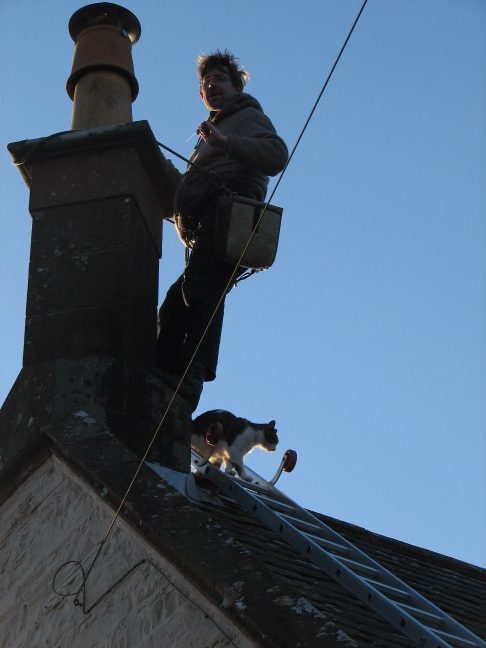 If we’re out and about, Jason is very often out with us. And if ladders go up anywhere, he seems to like nothing more than scrambling up them, maowing in a pathetic way to indicate he’s stuck, then sorting himself out. Good ol’ cats

Wood sheds: given the fact wood is our major heat source and likely will be for the foreseeable future, wood sheds are a source of much attention and joy when they’re sorted. At the moment it’s the elm from the standing dead tree we had down which is being processed and put in sheds – but I took a bit of an audit (Jan 2017 – I’m posting November’s update rather late) and we’re doing really well in terms of our current usage – possibly with even up to a couple of winter’s worth of wood stacked and seasoning. That’s the kind of position I want to be in! 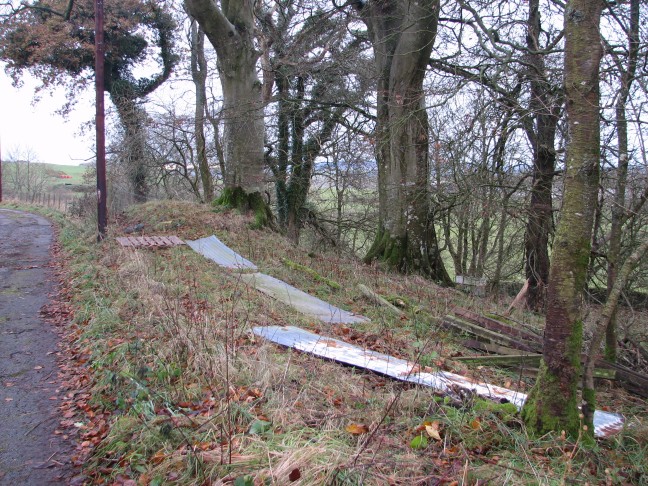 Foreground: sheets of tin from (see next photo) the old pig pen at the bottom of the hill. Background: three pallets laid out and awaiting wood. 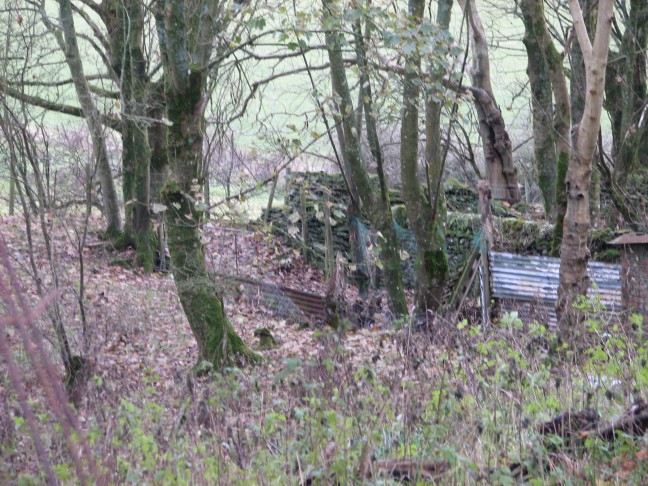 Aforementioned former pig run at the bottom of our bank – the tin is gradually getting repurposed for, pretty much exclusively, wood shed roofs 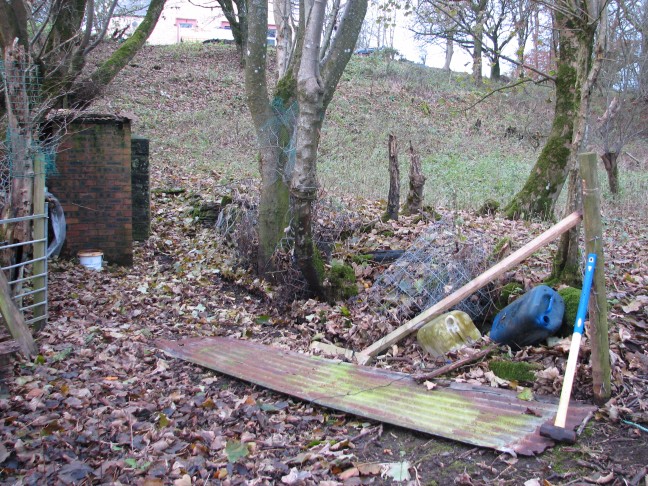 Yup, that hammer had something to do with the piece of tin being on the floor 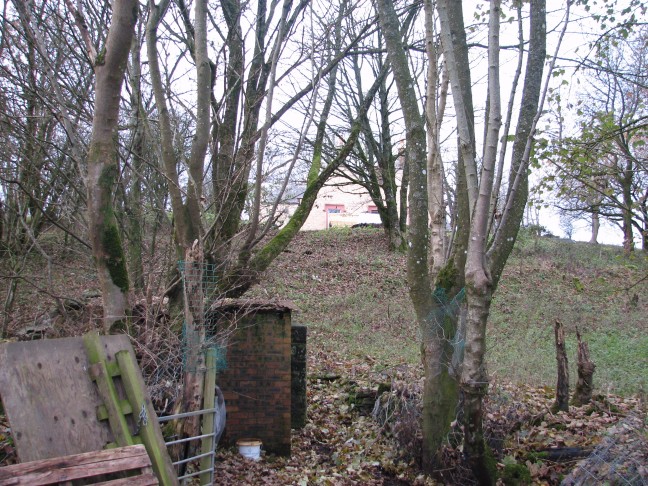 Former pig pen, this time looking up towards the house – as you’ll see, rapidly reducing amounts of tin! 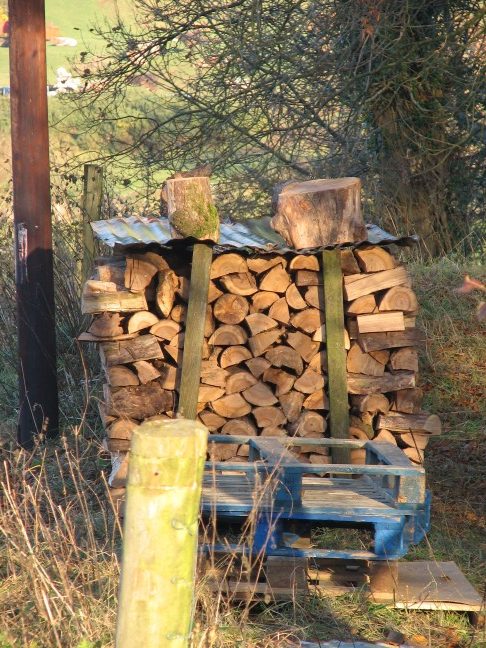 …and now those three pallets complete with wood and tin in situ. Now for the next stack!

And…more photos of the land and it’s gorgeousness 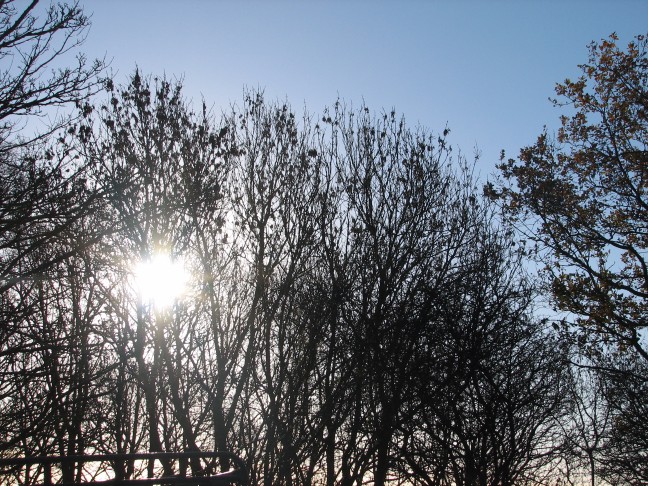 View from the front door with the sun rising 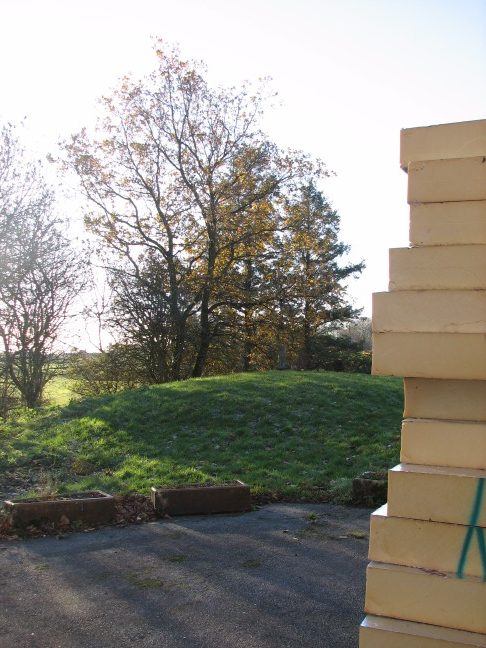 Yup, the stack of insulation lives on… 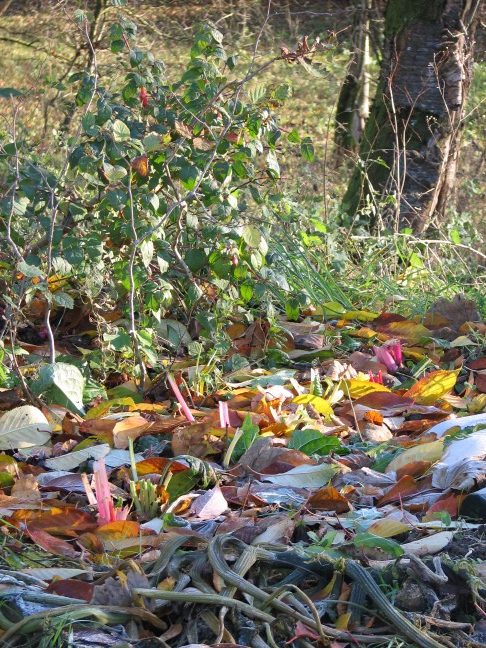 The gorgeous colours of autumn leaves. Visible because…the deer had been in and munched up all the chard leaves (there’s a row of chard plants in there from fore-to-back-ground. Promise). They also had a go at the elder saplings in the same bed but although they took the leafy stuff, the saplings still look strong. We think it was young deer just looking for forage as the other sources in the hedgerows etc. were coming to an end – but it’s meant deer fencing has moved up the list of priorities again… 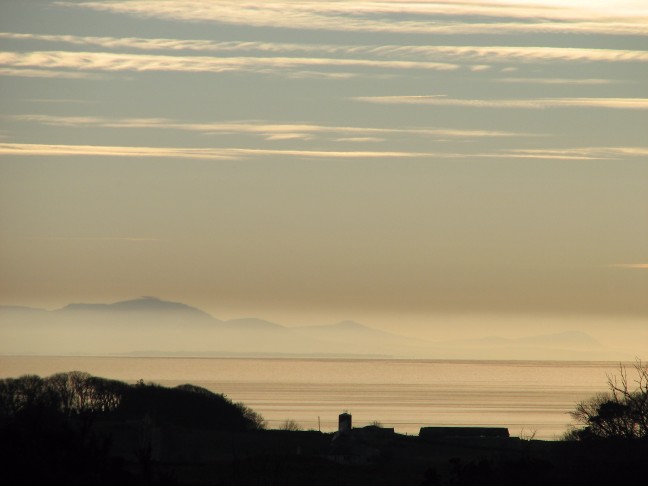 Borness & the sea, with the Isle of Man emerging through the mist 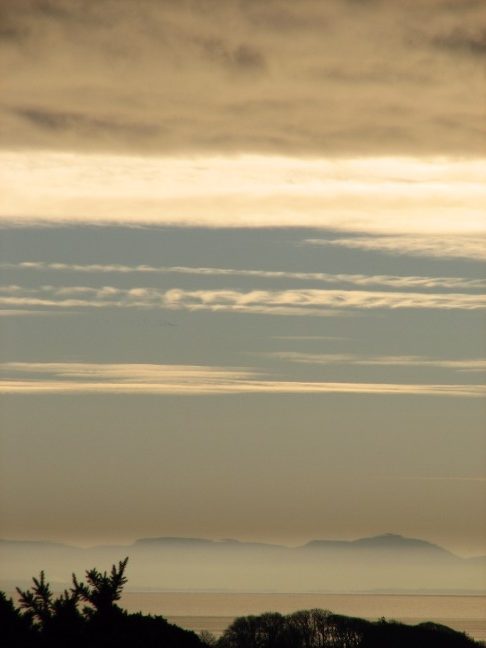 Sea, mist and sky. Can’t ask for more (looking South from the house – again with the Isle of Man in the background) 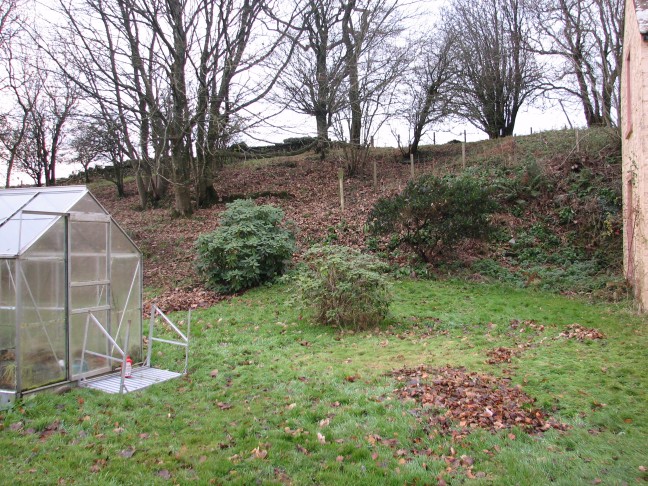 My raking standard is nowhere near my Dad’s, but I did at least get round to raking the two lawns. Oh, and that bush in the middle of the lawn? No longer there (but we’ll get to that in January’s update) 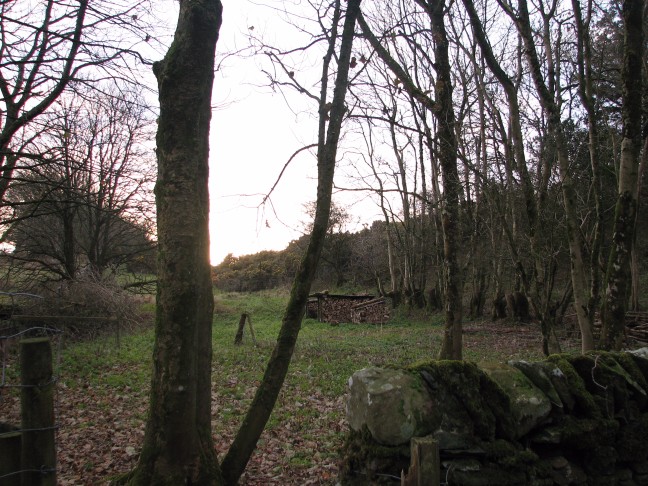 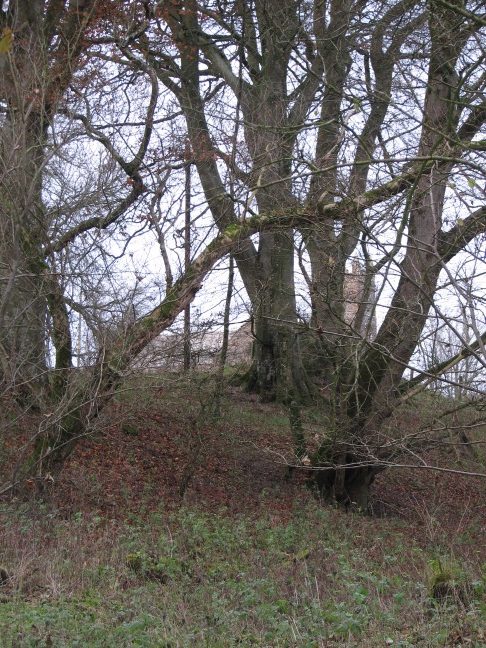 Looking up towards the house from the ash coppice space. This is a lovely little woodland walk space at the moment. May well feel quite different once the ash are all down to 4-5ft (rather than the 20-30ft they’re currently at) but that will come in time 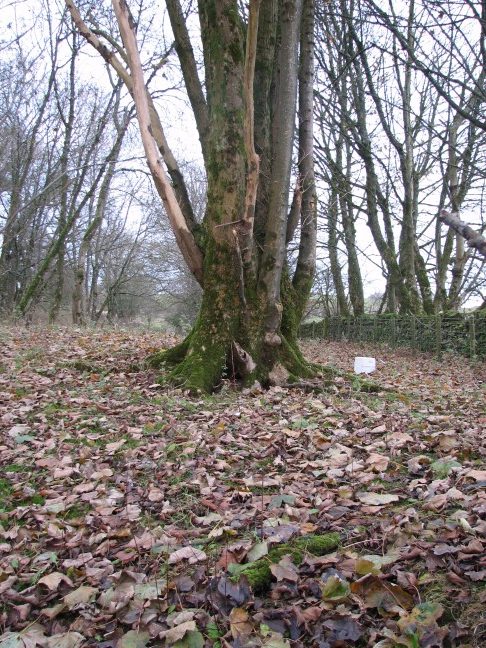 An elm (?) looking north from the former pig pen – and lots of leaves! These certainly aren’t getting raked – this bit we’re just leaving as a woodland glade for the time being. Lovely feeling down there 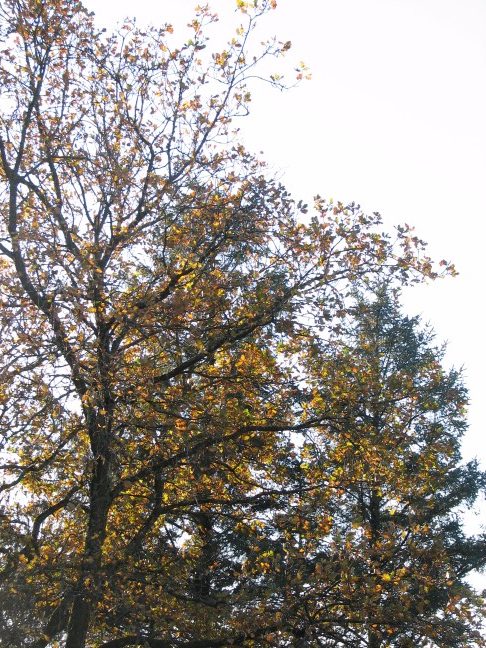